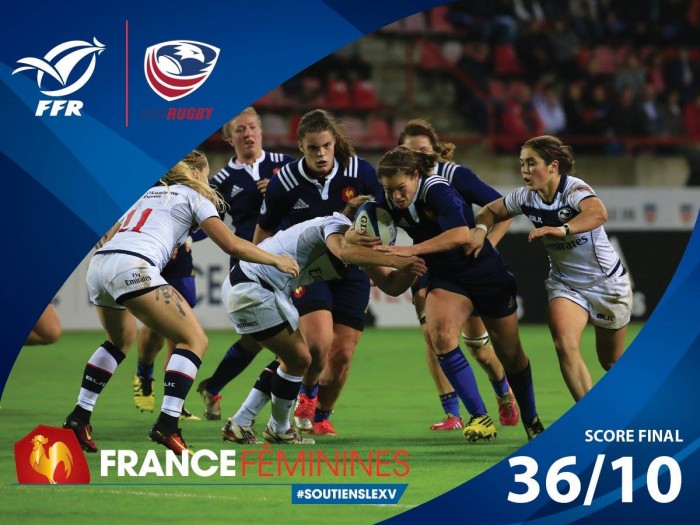 Report, slightly amended, from US Rugby: Alev Kelter, wining her first XVs cap, kicked off for the United States but she and most of the US team did to get her hands on the ball again until after France opened the scoring. Although the US forced their Franc e to knock on from the kick-off, No. 8 Kate Daley conceded a penalty from the ensuing scrum, and France – in a move we have seen so often - then used the a lineout maul to push over hooker Agathe Sochat for the 5-0 lead after four minutes.

However, the U.S. overturned another French maul a minute later to set up an attacking platform behind their 22. Captain Hope Rogers' run neared the try line, and she followed Alycia Washington's crash-ball carry with one of her own into the try zone. Fly half Kimber Rozier converted to give the Eagles a 7-5 advantage.

Washington was close to scoring from a quick tap all by herself in the 12th minute, drawing a penalty in the process, but the Eagles conceded the lead for good before ticking away at the scoreboard again. Despite controlling possession for large portions of the first half, a penalty here and there as well as the need to kick away allowed France territory to attack.

Lock Lenaig Corson trotted down the touch line in the 24th minute and France moved the ball to the opposite side for centre Caroline Ladagnous to reclaim France's lead at 10-7. Rogers made the smart decision when Kelter drew a penalty call in the 30th minute, however, having Rozier kick for points to put the teams back on terms. The fly half's conversion was successful to tie the game at 10-10.

France began to find the ascendancy as the half neared an end, getting the last attacking opportunity with the Eagles called for successive penalties in their own half. The U.S. held the try line for several phases before the ball shifted towards the middle of the field, where prop Annëlle Dessayes beat wing Kelsi Stockert one on one under the posts. French fly half Audrey Abadie added the bonus points for a 17-10 score line at the break.

The Eagles came out for the second half with intent, but France struck first. Full back Laurianne Lissar put her side in scoring position and a maul formed in front of the posts to give Ladagnous the space she needed out wide to score her second try of the game.

Beginning to feel the lead grow insurmountable, the Eagles started to make individual mistakes in attempting to keep the attack flowing. France capitalized, continuing to strategically use the maul for a Romane Menager try in the 55th minute for a 31-10 lead. A more free-flowing attack in which the ball was moved at pace in the 60th minute led to substitute Yanna Rivoalen's try and the 36-10 score line.

Laure Touye bore the brunt of the match official's citation in the 73rd minute, receiving a yellow card at the end of a long phase of French penalties. The Eagles opted for touch rather than points on multiple occasions - looking for tries - but could not find the try zone prior to the final whistle.

The Eagles will be pleased with portions of their game with a rematch on the horizon, as the continuity carried over from the Women's Rugby Super Series, combined with the additions of previously-unavailable veterans and newer athletes to the setup, will allow Baggetta's side to improve for Friday.