New Zealand have won the Dubai 7s - their fifth World Series tournament win in a row. 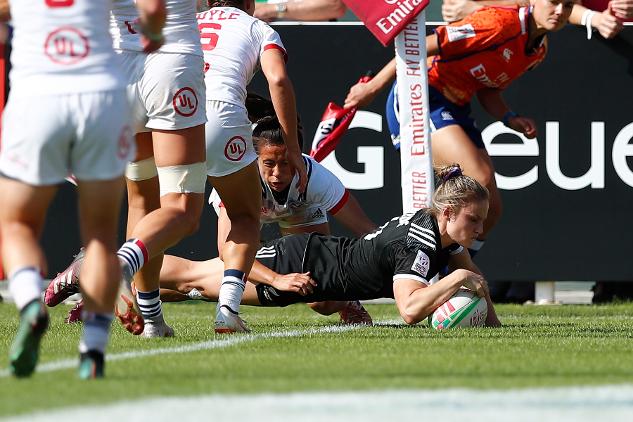 ​With the general mayhem of unexpected results ahppening all around them, New Zealand sailed serenely through the Dubai Sevens, rarely being even faintly troubled. In all of the six games, only Ireland managed to finish within a single score in the pool stages, while on the second day their reoute the final was imperious. It was only fitting that their opponents in the final was Canada, as the only other team unbeaten to that point.

Including the World Cup and Commonwealth Games, New Zealand have now seven major sevens tournaments in a row, and seem to be playing at a different level to everyone else.

Most of the teams for Dubai included a mix of experienced players and new faces - England, Australia and Spain all included three teenagers in their 12-player squads - but it was one of the oldest squads – France (with a sevens squad, on average, older than the test team that beat New Zealand a week ago) that opened the first day against Spain.

The result was a straightforward for France against their European rivals, and most of the first round of games went similarly to seeding – except one.

England has been frustratingly failing to match their potential for most of the past couple of seasons, and opening up against Australia looked a tough start. But from the kick-off – where Emma Sykes kick failed to go 10m – the champions seem oddly subdued. Some great work by Emily Scarratt set up Abbie Brown for England’s first try after two minutes.

Evania Pelite pulled Australia back to 5-5. The game continued with England going ahead, and Australia pulling level until the final moments of the game. With England leading 19-12, Charlotte Caslick broke down the centre, but then sent a forward pass to Sharni Williams – an error that typified the misfiring of the Australian team. England gained possession, and Natasha Hunt ended the game with a fourth England try and a 26-12 win, England’s first win over Australia since April 2016.

Round two followed a similar pattern, with all games going with seeding apart from England’s game, this time against the United States. The Eagles lead twice, through Cheta Emba and Naya Tapper, but Abbie Brown pulled the one back. The score remained 12-7 to the USA at the start of the final play, by Amy Wilson Hardy found a gap through the centre of Eagles defence to pull level – and Natasha Hunt converted to give England the win.

The third round began with a win for Fiji against Spain – but not a big enough win to give them a quarter-final spot. A great battled between Canada and France followed, with scores from Brittany Benn and Kaili Lukan being match by a brace from Chloe Pell, but the crucial moment in the game was a yellow card for France’s Anne Cecile Ciofani, Charity Williams getting the winning score seconds before Ciofani was able to return to the field.

United States and Australia were head to head for the second place in Pool B, and were locked at 17-17 with 30 seconds to go before Emba broke down the wing to win the game for the Eagles. Australia finished the day with a single win, but it was enough for a best third-place quarter-final spot.

On the second day the quarters - as is often the case - included three big wins, and a battle. New Zealand saw off Russia 31-0, and Canada beat Ireland almost as comfortably by 24-7. Australia opened the day against England – again – but this time the result was different, despite England taking an early lead through Deborah Fleming. Australia roared back with three first half tries, and two more after the break. Jess Breach’s score at the end was just consolation for England.

The real battle was the United States against France, where the USA took a 12-0 lead into the final minute only to see France score twice… but fail to convert. The USA were into the semi-finals.

New Zealand swept through their semi-final against the USA 22-0, but Canada and Australia went to the wire, Canada winning the game 15-10 at the death through Bianca Farella.

And so to the final where the Ferns were seriously challenged by Canada, the Canadians quickly replying to New Zealand’s opening score and then pulling back 10-15 with four minutes to go. But Tyla Nathan-Wong – the player of the final – was on hand to settle the game for the Ferns two minutes later.

The outcome is that the Ferns are already six points clear in the series, and looking unstoppable. Canada and the USA are second and third, separated by just two points, and Australia and four points behind in fourth.

Those would be the four automatic Olympic qualifying places, which means that Europe now have a major task to get any automatic spot and avoid the potential mayhem of five World Series teams all competing for just two Olympic spots at the European Championship, and the Repecharge. The best place European team – France - is now six points behind that crucial four place.