The national women’s rugby sides from Brazil, Thailand, South Africa, Spain, USA, Russia and Georgia will all do battle for the IRB Sevens World Series in Dubai this December. 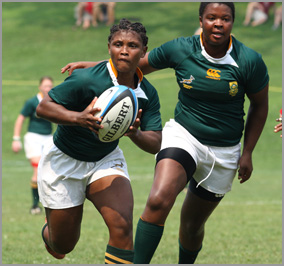 The competition comes in the same year as the first appearance by women's teams at the IRB Rugby World Cup Sevens which Australia won.

By the time the event is held, rugby will know if it has won a place in the Olympic games with just four days to go until the IOC votes to decide whether 7s will be included in the 2016 Olympic Games in Rio de Janeiro.

The IRB Sevens World Series continues to go from strength to strength, attracting record levels of travelling fans and broadcast coverage each year and the popular Dubai event has been a major factor in that success, said IRB Chairman Bernard Lapasset.

At a time when Sevens is reaching out for Olympic Games inclusion, the interest in the Series has never been higher thanks to the performances of Kenya, Argentina, USA and Russia in recent years. The Series truly is a global festival of world class Rugby.

The fixtures and timings for the womens schedule in Dubai have not yet been announced. Six of the seven women's nations participating this December played in the Rugby World Cup 7s earlier this year with Georgia being the only team not present at that event.