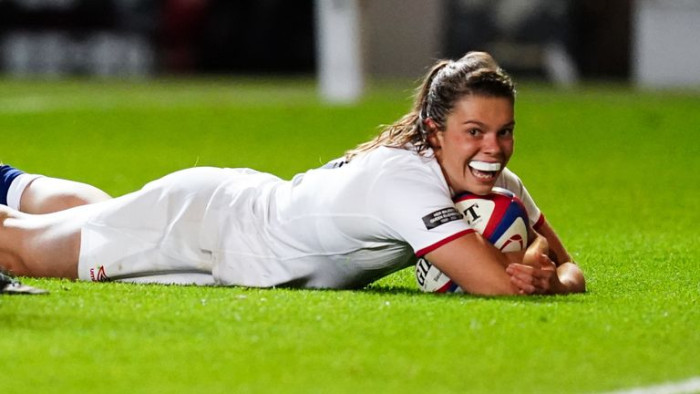 England rounded off the preparations for the Rugby World Cup with a 11-try performance against their Wales counterparts with a 73-7 win at Ashton Gate on Wednesday.

The win was also the 25th consecutive victory for the red rose team as they become the first Test nation to accomplish the feat.

Playing in front of a 11,600 crowd, England got their opening try early as Helena Rowland capitalised on a poor Wales defence to score and Emily Scarratt kicked the conversion to make it 7-0.

Rowland thought she got her second try in the 12th minute but was disallowed after Elinor Snowsill had an obstruction in the build up. The visitors eventually levelled the scores as Gwen Crabb drove over the line and Elinor Snowsill landed the conversion to make it 7-7.

It was a matter of time before the home side got the lead back as Scarratt breached the defence of Wales to sneak through the try line and also followed it with a conversion to make it 14-7. England looked unstoppable as Marlie Packer crashed over from a driving maul around the half hour mark and they were awarded a penalty try just before the break with Wales' Alex Callender sin-binned.

Just as the break was approaching, England with the numerical advantage on their side saw a wide pass released to Ellie Kildunne, who dotted down as they completed the opening half with a 33-7 lead.

England were the quickest to get off the block in the second half as their sixth try came through Cokayne after a driving maul and Rowland got her second shortly to make it 45-7. The 50 point mark came inside the third quarter as Scarratt touched down following a a simple lineout and maul.

With Rowland completing her hat-trick and Hannah Botterman, Alex Matthews following the suit, England will be confident heading into the showpiece event with another dominating victory.