England were far too good for any of their opponents as they won the first leg of the European Trophy in Zagreb. 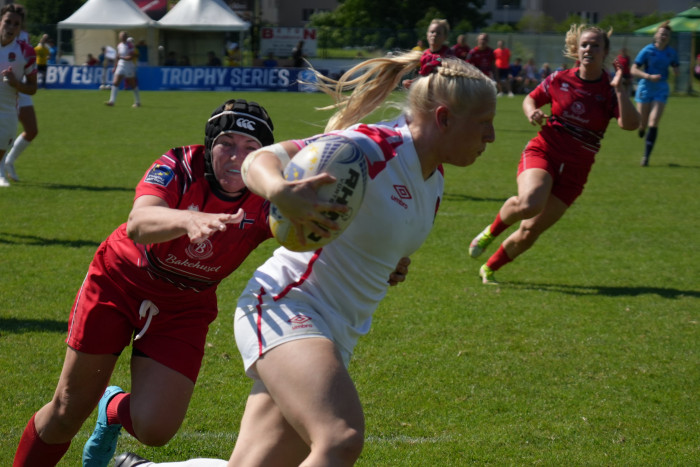 England scored 339 points in their six games in the first leg of the European Trophy, passing fifty opinions in every game apart from one (when the scored just 49), and recording exceeding the previous record for their record for biggest ever win twice.

That a squad with professional players with World Series experience should do this against entirely amateur opponents was no surprise.

England had never played at this level before – indeed, despite over 25 years of international sevens, England had never previously played any of the teams they came up against prior to the semi-finals. It was only their non-participation in last year’s European Sevens that resulted in their relegation to the second tier.

They began the opening day with 51-0 and 52-0 wins against Moldova and Georgia, before shattering the record for their largest win with a 70-0 drubbing of Hungary – beating their previous record by 11 points.

Relative fitness was often a contributory factor. In the quarter-finals on Day 2 they cam up against a nimble and determined Norwegian team who held England at bay for until nearly hallway through the first half before England ran away to win 49-0 as their opponents tired.

Sweden were shrugged aside 61-0 in the semi-finals, setting up a final against Italy.

Italy had also been relegated for the same reason as England, but as a non-World Series team were not as far above their opponents as England. They won their pool comfortably by two scores or more in each game, and beat Finland by four tries to won in the quarters.

However, in the semi-finals they were pushed all the way by Portugal – another team with Grand Prix and Championship experience – but just held on to win 15-10.

And so to the final. Italy have beaten England at sevens (back in 2010) but that was never going to happen here, and England ran away against a tired looking Italian team, winning 61-0.

The second leg of the Trophy starts on Saturday in Budapest.