England travelled to Cardiff this weekend as slight favourites. Their comeback win against France last weekend impressed – but Wales also did well in Italy, showing an impressive defence as they recorded their fifth win under Rowland Phillips. 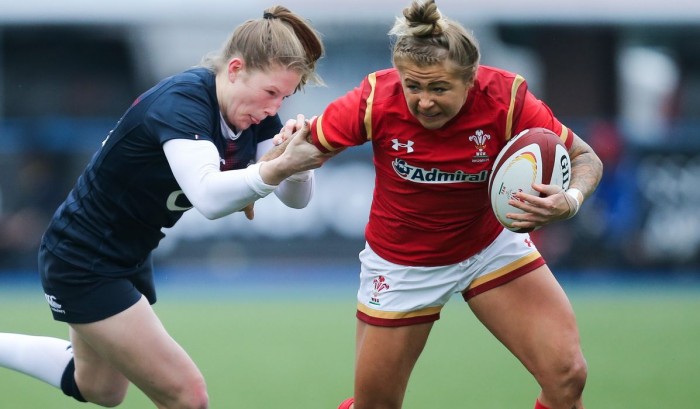 A close game was expected by everyone. Which just shows how wrong everyone can be. 11 unanswered England tries, and a 63-0 win – or, to put this into context…

* The biggest Welsh home defeat since 2005, and their third largest defeat ever
* The biggest England away win since 2008, and their seventh biggest away win
* More than twice as many points conceded by Wales than in all of Rowland Phillips’ previous games put together

A crowd of 4,113 created a great atmosphere for the morning 11.30am kick-off that saw Tamara Taylor's record her 100th international cap for England, who made a much-improved start compared to last weekend. They were ahead in the third minute when the ball was sent wide to Wilson Hardy. Five minutes later Cokayne crashed over for her sixth international try and Hunt was on the end of another flowing move soon after to score her side's third.

England were dominating out wide, and deserved a great deal of credit for the way they moved the ball across the field.

England’s first ever attacking bonus point came up barely a quarter of the way through the game when Thompson scored down the wing before Katie Mclean cut inside to score in the corner after 27 minutes to pass 400 international career points for England. Sarah Hunter was then on the end of a catch and drive for her side's sixth try three minutes before the break.

Wales had struggled to implement any form of attacking game plan in the first period, spending almost the entire 40 minutes focusing solely on defence – and matters were soon made more difficult by the loss of both full-back Dyddgu Hywel and back-row Rachel Taylor to injuries at the start of the second half, leaving them without two of their most experienced campaigners, and having to empty their bench early into the half in an attempt to breathe new life into their challenge.

For England, soon after the restart Waterman showed the pace and strength she had demonstrated against New Zealand and France to finish in the corner, and nine minutes later she dived over for her 24th try on her 24th Six Nations appearance.

Wales, to their credit, never gave up and arguably finished the game the stronger of the two teams, more than matching the fitness of their professional opponents. However, England managed to keep them out for a comfortable win.

After her 100th appearence Tamara Taylor said: "We had such an early kick off that I didn't want any distractions this morning. I therefore marked the occasion on Thursday so that this morning I could just focus on the game. To get such a win was brilliant but we're not the finished product yet. There are still things for us to work on but we are now beginning to see our potential as a team.”

England coach Simon Middleton added: "We are proud of how we came out and played today. We definitely built on our performance against France and it was a real team effort out there. There are still things for us to work on but it was great to get the clean sheet and keep them from scoring as Wales put up a strong fight, right up to the final whistle.”