There were wins for England, Australia and USA in the opening games of round two of the World Cup. 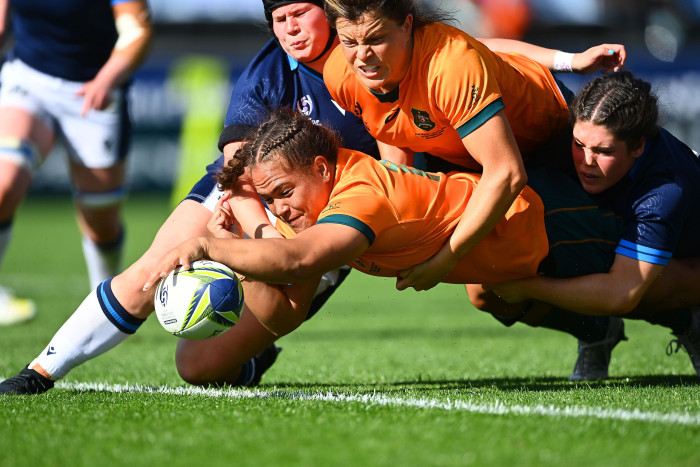 England ran in 14 tries in their opening win against Fiji last weekend but they found points much harder to come by against a resolute Les Bleues defence.

Emily Scarratt scored all of her side’s points in Whangārei, her second penalty of the match in the 62nd minute giving them a 13-0 lead with less than 19 minutes to play.

France refused to give in though, and after Gaëlle Hermet crossed the whitewash in the 64th minute, Les Bleues put the Red Roses under considerable pressure.

That France were still in the contest at that stage owed itself largely to a committed rear-guard action. France put in an incredible defensive effort throughout the match, standing firm in the face of wave after wave of England pressure.

In the opening 26 minutes alone, Les Bleues made 81 tackles to their opponents’ 14, but it came at a considerable cost as scrum-half Laure Sansus and number eight Romane Ménager both left the field injured.

The Red Roses finally turned possession and territory into points in the 24th minute as a 14-phase move ended with Zoe Harrison popping a pass to Emily Scarratt, who cut back against the defence and scored.

Scarratt converted to give England a 7-0 lead and she would add a penalty on the stroke of half-time to stretch her side’s advantage to 10 points.

The second half played out to much the same script, but England again struggled to break through the committed French defence.

Ill-discipline from Les Bleues presented the Red Roses with a penalty right in front of the posts in the 62nd minute, though, and Scarratt duly slotted it through the posts to stretch their lead to 13 points.

France were staring at a first Rugby World Cup pool stage defeat for 16 years, but two minutes later they found a way back into the contest with a wonderfully worked try.

A crosskick from Caroline Drouin found Joanna Grisez in space on the right wing, and although she was stopped before the line, Gaëlle Hermet was on hand to dot down.

The pressure on England did not let up in the final 15 minutes but the Red Roses were able to see it out, Harrison’s kick to touch confirming a 27th test victory in a row.

Having lost to Italy in their opening Pool B match in week one, the Americans knew they had to perform well here.

And after a below par first 40 minutes, they stepped things up in the second period to come through this one after an entertaining clash.

Japan, who lost 41-5 to Canada in week one and are ranked 13th in the world, took the lead after just five minutes when scrum-half Megumi Abe went over. Fly-half Ayasa Otsuka missed the conversion and it was 5-0.

Things got better for the Japanese side in the 13th minute when USA’s blindside flanker Kathryn Johnson was yellow carded.

When she was off the team with 15 players were unable to take advantage though and, around the same time as she returned to the fray, USA got on the scoreboard thanks to a penalty by fly-half Gabriella Cantorna.

The next 17 minutes or so were scoreless meaning that was the way things stayed by the time the half-time whistle was blown and it was poised nicely at 5-3 to Japan.

USA needed a fast start to get into their rhythm after the interval and it came for them when hooker Joanna Kitlinski bagged a superbly taken try after 45 minutes. Cantorna could not convert and they had a slender 8-5 lead.

It only lasted six minutes though because winger Hinano Nagura scored Japan’s second try to show that they were going to be no pushovers. Otsuka missed the conversion.

In this end-to-end encounter, USA went straight back up the other end and scored their second try.

This time it was Alev Kelter who went over for five points, though Cantorna’s missed conversion meant their lead was again a small one at 13-10.

Knowing they needed a big last 20 minutes to shake off Japan, USA made three changes around the hour mark and the fresh legs paid off almost immediately.

Elizabeth Cairns, one of those substitutes, scored their third try with pretty much her first touch of the ball. Kelter converted.

And with 10 minutes to go winger Jennine Detiveaux scored USA’s bonus point fourth try which Kelter converted to make it 27-10.

Japan have plenty of battling qualities though and they scored their third try of the game with four minutes left through winger Komachi Imakugi.

She converted that one herself, but was then yellow carded for a deliberate knock on.

And USA made sure of the win with a late penalty through Kelter.

This was a pulsating 80 plus minutes at Northland Events Centre in Whangārei, with Scotland dominating the first half to lead 12-0.

Australia got their running game going in the second half and their pressure paid off with two converted tries to give them their first win in the tournament this year. Scotland, after a close loss to Wales in week one, picked up a second losing bonus point.

Scotland, took the lead in the ninth minute through a try from hooker Lana Skeldon from a driving lineout. Fly-half Helen Nelson could not convert and it was 5-0.

Sixth in the world Australia were trying to get a foothold in the game and they began getting the ball to exciting players like centre Sharni Williams and winger Maya Stewart.

However, it was Scotland who nearly went further ahead when winger Rhona Lloyd burst through only for Australia full-back Lori Cramer to deny her with a last gasp tackle.

Try number two did come in the 27th minute when Scotland used their driving lineout to good effect, Skeldon peeling off the back to power to just about get there before Lauren Jenner, the referee, awarded a seven point penalty try.

Australia were 12-0 down and, to add insult to injury, their hooker Adiana Talakai was yellow carded.

The Wallaroos skipper Shannon Parry then went off to be replaced by Ashley Marsters so that the latter could play hooker.

Australia did well to survive the 10 minutes while they were down to 14 players and, just as Parry was returning to the fray, they got themselves near the Scotland try line.

That chance was created by a great run by tight-head prop Eva Karpani, but before half-time they could not convert that territory into points while Scotland lost full-back Chloe Rollie to injury, replaced by Shona Campbell.

Australia had the wind advantage in the second period and were keen to get on the scoreboard as soon as they could.

Number eight Grace Hamilton and Mastercard Player of the Match Karpani were the ones making good yards, but the Scottish defence was standing firm.

That was until just before the hour mark when the team created space and winger Bienne Terita scored a try. Cramer converted and it was 12-7.

With 10 minutes to go that was still the score and it was going to be a tight finish.

And with seven minutes to play Australia drew level at 12-12 when Masters ran a great line and powered over for a try. Cramer converted and they were 14-12 up.

The drama continued and with four minutes to go Marsters was red carded for direct head contact with Scotland replacement Sarah Law.

Scotland tried to get the winning points, but Australia held on to win despite Talakai receiving her second yellow card and a red as a result with the clock in the red.