England have won the European Trophy after victory in the second leg in Budapest, following on from winning the first leg last weekend. 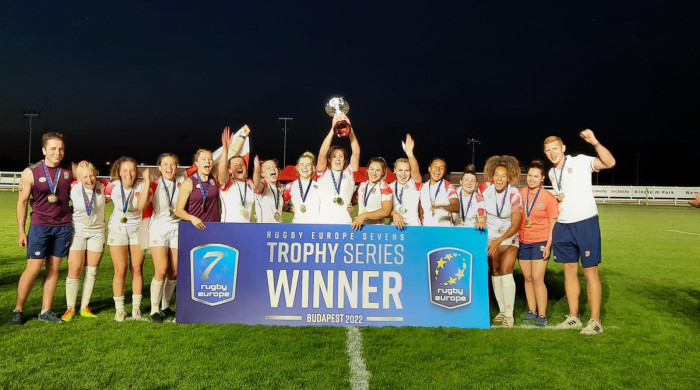 England will return to the European Sevens Championship next year having won the European Trophy without conceding a point over the two legs, while scoring 628 points in their 11 matches.

They will be joined in the Championship by Italy, Sweden and Portugal - who are also promoted- and all four teams will also take part in Europe’s Sevens World Cup qualifier.

England again won all their games by a significant margin. With Finland absent due to positive COVID tests amongst the squad, England had only two games on the first day, beating Israel 49-0 and Georgia 48-0.

Italy – beaten finalists in the first leg – also won their pool comfortably, while Portugal ended top of Pool C after a narrow 19-12 win against Sweden in the final round of pool games.

On the second day England began with a new record 85-0 win against Hungary – the highest ever score by England, and only three points less than the world record of a women’s sevens international, to reach the semi-finals.

Portugal and Sweden joined them after comprehensive five- and six-try wins, but Italy only made the final four by a narrow 12-7 win against Turkey.

England recorded another fifty-point win their semi-final with Sweden, while Italy came from being behind in the first half to beat Portugal 29-17.

The final was again as one-sided as the first leg, this time England beating Italy 59-0.

With four teams promoted to the Championship, to be replaced by just two relegated teams, there was no relegation this year to the Conference.