England won the first ever women’s Six Nations Final, beating France in a ferociously physical contest at the Stoop in Twickenham by 10 points to 6. 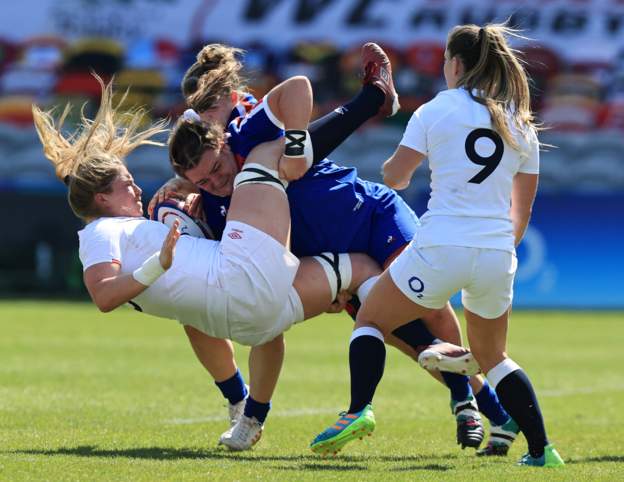 Neither side was at their best, as the wide players on a perfect surface in the sun, barely saw the ball with the game was largely a battle of the two packs.

Though France had the upper hand in the set-piece, as the game wore on, England’s big carriers, Poppy Cleall, Marlie Packer and Cath O’Donnell got more and more into it  while Zoe Aldcroft was also infleuntial, and France conceded too many penalties to get ahead.

As has been the way with these teams in recent meetings, there was very little to separate them in the opening exchanges.

England had the bulk of early possession but in the face of ferocious French defence and because of a tendency to over play it under pressure, they had no return from various visits to the French 22.

France defended like their lives depended on it with one particular Rose Bernadou hit on Cleall memorable, while the visitors’ scrum was well on top with several well-timed drives knocking England off their stride.

There were no clear-cut chances inside the first half hour though Emily Scarratt had missed two chances at the posts.

Finally on the 30-minute mark France did create a fantastic chance with a raft of players including Laure Sansus, Bernadou and the excellent Madoussou Fall all involved on one wing, while Romane Menager and Emilie Boulard linked up on the other. Boulard raced over but the final pass was forward and Caroline Drouin missed the shot at the posts.

The referee’s whistle dominated the final ten minutes of the half and with the French coaching team surprisingly pulling Bernadou off after 35 minutes, England drove into the French 22 and with Cleall managing to get on the front foot for the first time in the game, her brilliant carry and drive took England to their first score and they turned around 7-0 up.

France started the second half well, with their scrum dominant again and Drouin took advantage to go for the posts. That effort missed but she did knock over the second chance minutes later.

France brought on Pauline Bourdon to shake things up at 9 but England, despite their set piece woes, were getting on top in open play up front with Cleall coming more and more into it andO’Donnell too influential. With Sarah Hunter and Amy Cokayne coming on England looked more lively and more settled with both adding calm and experience.

The game rather descended into an error-strewn affair with a raft of penalties making it far too stop start. Leanne Riley and Sarah McKenna dropped two balls under pressure, Jade Ulutule booted it out on the full, and neither team managed to get much going by way of flow.

France though did get their chance. They drove a lineout in the England 22 on 70 minutes and Bernadou, back on the field somewhat controversially, and Lenaig Corson got them close but as was the way of the half, the ball was dropped a metre out. Drouin though kicked a penalty to make it 7-6 with just eight minutes to go.

England then took control with two well managed lineouts by Cokayne forcing France back into their 22 and when Scarratt  made it 10-6 that was that.

Both teams ultimately looked rusty and that neither had been tested over 80 minutes in the competition so far was obvious.