England U20s 77 Scotland U20s 0England's young guns were far too good for their Scottish counterparts in the first ever fixture between the two countries at this level in the women's game. 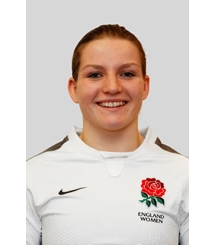 England stormed to a 77-0 victory running in an impressive 13 tries at Gosforth RFC.

Saracens Hannah Gallagher (pictured) ran in a hat-trick of tries while there were also braces for Bristol wing Lucy Demaine and Worcester scrum half Charlotte Keane - with many of England's players showing the benefit of their experience in the women's Premiership this season.

The victory was the second in a row for the England U20s who defeated France 12-5 two weeks ago at Worcester.

Bristol centre Amy Wilson-Hardy opened up the score sheet for the England U20s after just six minutes. A penalty gave England the opportunity to kick to the corner and England took their line-out well with Wilson Hardy crashing over the try line. Thurrock fly half Emily Scott added the conversion.

Bristols Demaine kept Englands cause on track with a 13th minute try and her first of the evening. Another good line-out saw England attack through the mid-field with Demaine then getting her chance and she made no mistake. Scott this time couldnt make the conversion.

Worcester centre Ceri Large handed England a 19-0 lead with a 23rd minute converted try. Some good work by both the forwards and the backs saw England dominate possession and with Large then showing good footwork, she found the line. Gloucester fullback Rachel Roberts soon matched Larges efforts when a turn over ball handed Demaine space. Some good work by the forwards then created space for Roberts on the right wing.

Saracens flanker Gallagher was then on the score board for her first two tries touching down on 28 and 32 minutes respectively, before scrum half Keane rounded off the first half proceedings for England. With Scott adding two further conversions England led 43-0 going into the break.

The one way traffic continued after the restart with Gallagher again taking the spoils, this time after some good continuity work by the forwards. Scott, however, couldnt make the conversion.

Bristol wing Katie Mason was next to add her name to the score sheet. She benefitted from a good scrum which saw No. 8 Alex Matthews pick up and go. Keane then fed the ball out to Mason who ran in to score in the corner, making Englands lead an impressive 53-0.

No. 9 Keane added her second try of the evening on 60 minutes as did Demaine on 67 minutes. Leanne Riley, making her U20s debut, then picked up try number 12 for England. Some good pressure by the home side led to a turn over, and some quick hands saw the ball moved out to the midfield. Riley then cut a good line and scored left of the posts. Large this time converted.

Skipper Fiona Fletcher then made the most of an error by Scotland in their line out when they lost the ball, and Fletcher pounced on it to dive over the try line. Large couldnt make the conversion, handing England a 77-0 victory.

England U20s Coach Amanda Bennett said: It is great to have a two from two win record. We had a lot of control and possession in this game and our decision making was very good. We scored some good tries, won good ball, created spaces and we did the basics very well. Overall I am very pleased.

We play Wales next month and they are very different opposition to both France and Scotland. Having lost to them once last season we know we need to keep improving but we have got six weeks to regroup and I am sure we can step up to the challenge.

Substitutions: Gallagher for Callaway Bawden (18), Thomas for Notman (51), Kingston for George (57), Davidson for Keane, Jones for E. Scott (61), Riley for Wilson Hardy, Mills for Matthews (both 70),