Richmond and Saracens will face off in the English Women's Premiership Final this Sunday 17th at The Stoop live on Sky Sports. 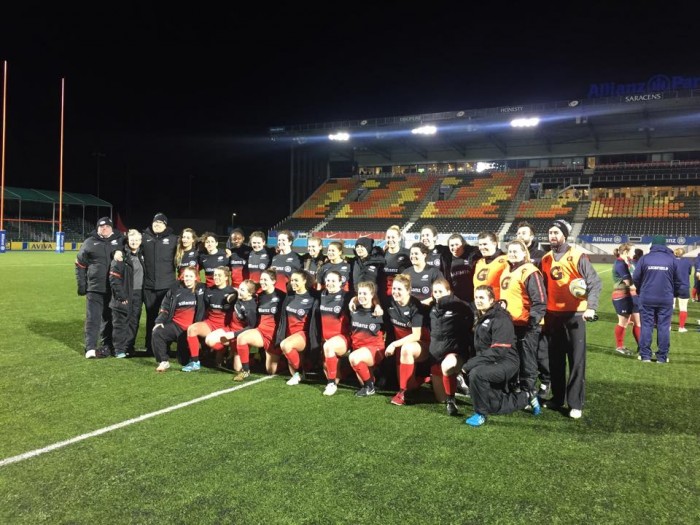 A spirited second half performance helped Saracens book a place in the Premiership final and take a step closer to regaining their title. The reigning champions were pushed all the way by a tenacious Lichfield side at Allianz Park but second half tries from Lauren Cattell and Poppy Cleall were enough to seal the 19-12 victory.

Lichfield started strongly but Saracens got the first score when number 8 Sonia Green picked from the base of a scrum and released Deborah Fleming. The ball quickly was recycled by the pack for centre Brooke Sim to take on the Lichfield line and put Hannah Gallagher through the gap to score under the posts. Lauren Cattell added the extras.Saracens lead was short lived as Lichfield struck back through prop Roz Crowley burrowing over from close range - Sarah  Nicholas converting to bring the scores level.

The Lichfield set piece continued to test the home side and were rewarded for their efforts as they turned over the ball allowing powerful number 8 Harriet Millar Mills to break through to score giving the visitors a 12-7 lead going into the break.

Cattell scored for the hosts shortly after the break and score again when flyhalf April Brown chipped through a perfectly weighted kick which bounced up into the hands of Poppy Cleall under the posts to give Saracens the lead. Cattell converted to take the score to 19-12.

Richmond were more convincing in their 35-0 win over Worcester.

Abi Chamberlain opened the scoring with a penalty and then Vickki Cornborough scored a try from a strong maul and carry afterwards from Amy Turner.

Only dogged Richmond defence kept Worcester out as they pushed for a score of their own and Worcester’s pacey back line ran back hard but came up just short and Richmond led 8-0 at the break.

Richmond turned the screw after halftime and an early well-worked move off a scrum put Cornborough in space and she sliced through defenders, giving her team a great territorial advantage.

As Worcester, for whom Bianca Blackburn was in fine form, infringed again in their own 22, Leanne Riley took a quick tap, catching the visitors unawares and scored under the posts.Cornborough got on the scoresheet for her second try of the day and the next try of the game came through some superb handling down the backline, drawing in defenders and creating enough space for McComish to run down the wing to cross the line.

But as frustrations mounted, so did the penalty count and both teams found themselves seeing yellow: Rocky Clarke and Ellisha Dee both spent 10 minutes in the bin.

It was all one way traffic on the scroeline at this point and replacement Laura Kapo rampaged her way to the line and brushed off tacklers to get five points. The conversion was missed, bringing the score to 28-0 before a penalty try wrapped things up.

Meanwhile in the playoffs at the other end, Bristol defeated Aylesford and Darlington Mowden Park Sharks defeated Wasps. Those results mean that Wasps will take on Aylesford in the relegation decider this weekend - a tough outcome for Wasps perhaps who have already beaten the Bulls twice this season.