Saracens and Richmond continue to set the pace at the top of the table with both recording bonus point wins at the weekend. 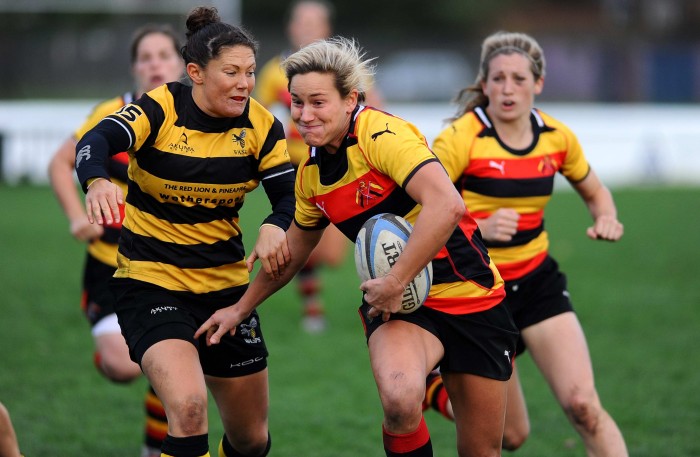 Image: Richmond's Claire Allan races away in the clash with Wasps. Picture thanks to Lee Crabb, Scrumpix.

Richmond pulled away in a strong second half performance, to beat local rivals Wasps, who had proved more than a match for the home team in the opening 40 minutes.

Wasps took the lead in this match with strong defence in the early part of the game pushing Richmond back and with their back three of Liz Riley, Gemma Rowlands and Marissa Lowe starting well.

Poor weather contributed to poor handling, with Wasps adjusting the better to the conditions, and they grabbed the opening score when Davinia Monteiro dived over for a 5-0 lead.

Richmond created a chance from a turnover to allow Jo Watmore to break and pass to Annabel Sergeant to level it up just before the break and Abi Chamberlain converted for a 7-5 half time lead.

Richmond showed their strength in the second half though, scoring early through Vicki Cornborough, who grabbed the first of three tries for the front row. Ellisha Dee made an appearance at 60 minutes and immediately helped turn over the Wasps scrum to allow Becky Essex to score from the back for a 17-5 lead.

Dee was involved again when the restart didn't go 10, and Richmond won a penalty from the scrum which was taken quickly, allowing Sergeant to score her second, converted again by Chamberlain.

The next two tries were courtesy of Dee, before Essex got her second on full time to give Richmond a convincing 41-5 win.

Bristol recorded a bonus point win on the road over Aylesford Bulls with a hat-trick from Katie Mason added to good braces from Nia Davies and Kay Wilson ensuring a good victory.

The seven tries meant that the trip was a successful one for third placed Bristol with Carys Phillips going well up front and Welsh international Phillipa Tuttiett going strongly in the backs.

Aylesford leaked the first try but hit back with a good score from winger Deborah Harwood. Despite trailing 27-5 at the break, the Bulls, who have yet to record a win at this level, would have been pleased with their determination to attack, which had seen them over the line only for a knockon to see a good try scoring chance go begging.

An early try from Charmaine Kayser gave them hope, but Bristol then showed their experience to power home confidently

Saracens women made the most of blustery conditions when they visited Cooke Fields on Sunday. Playing with the wind in the first half, they kicked into the corners well to ensure that Lichfield were pinned in their own half. They opened the scoring after five minutes with a try out wide and Saracens again showed their early dominance 10 minutes later when flanker Maggie Alphonsi scored from a pick and go, taking the score to 0-10.

Lichfield chose to play smart into the wind and kept the ball in hand, including a couple of successful driving mauls. However, Sarries found it all too easy to gain territory with the boot and earned themselves two more tries in the first half. The first came from inside centre Georgia Peedle who ran a hard line from a Saracens scrum, and the second from her centre partner Hannah Casey. Both were converted by fly half Sarah McKenna which took the score to 0-24 after 31 minutes.

Lichfield’s efforts in both attack and defence were not to go unrewarded though. After fighting to keep possession and again working their way up the field, they eventually broke down Saracens’ defence and some crisp handling saw winger Chelsey Fuggle with space on the right hand side which was enough to ensure she scored in the corner.

The second half was a much more even affair, with some fantastic running rugby from both teams. One such instance was a well-worked break from Lichfield which saw No. 8 Vicky Fleetwood score in the corner. Outside centre Vicki Jackson converted expertly from the touchline to take the score to 12-24 with twenty minutes left to play.

This was Lichfield’s last trip over the whitewash however, and Saracens continued applying pressure to score two more tries, firstly through their second row and second from Alphonsi.

Worcester registered a bonus point win at home against DMP Sharks on a windy afternoon at Weston’s.

The game started with the home side dominating possession, however DMP responded with solid defence and were a constant threat around the breakdown. Worcester registered the first points on nie minutes with a well-struck penalty from just inside the halfway line by centre Megan Goddard.

Worcester continued to pressure the DMP try line but failed to convert this into points, until fly half Ceri Large capitalised upon a poor clearance kick to charge over. Goddard collected the extras. Worcester’s second try came from another DMP error with flanker Lisa Campbell beating the cover defence to touch down. Goddard was unable to convert.

On 35 minutes some slick handling under pressure in the Worcester midfield made space for winger Sam Bree to score in the corner. A difficult sideline conversion by Goddard gave the home side a 22-0 lead going into the break.

Worcester exploded out of the blocks after halftime with winger Lydia Thompson scoring a superb individual try after collecting a DMP clearance on halfway. Prop Rochelle Clarke picked and went over just minutes later after good work by tighthead Tracy Balmer. Goddard converted both to take the score to 36-0.

Thompson scored a brace on 60 minutes with a searing run down the touchline from a well-worked midfield scrum move. DMP however continued to battle and were rewarded with a try for centre Jen Edwards on 75 minutes following a kick through. The home side had the last word when 18 year-old centre Sophie Watkiss was rewarded for her hard work all game with a try after a quick tap penalty. Large was unable to convert to leave the final score 46-5.