Richmond remain top of the table in the English Women's Premiership after a fine win over Lichfield at the weekend, but Saracens and Bristol kept up the pressure with impressive wins of their own. Lichfield and Aylesford Bulls remain winless at the bottom of the table. 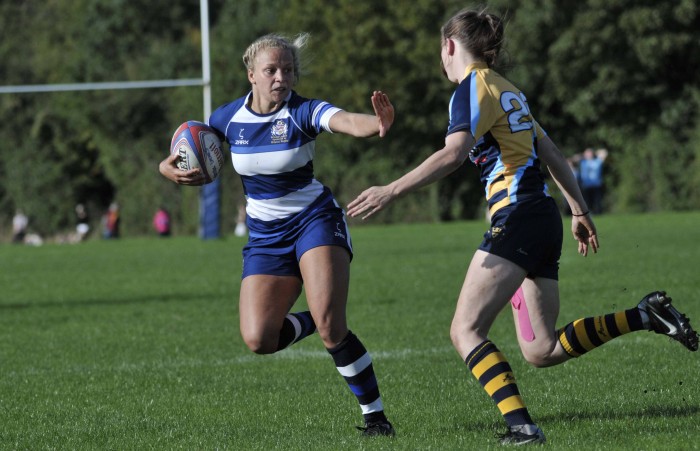 Bristol's Kay Wilson in action at the weekend. Image courtesy of Guy Lloyd

Bristol’s good start to the season continued with a fine win over last year’s champions Worcester.

The home team started well and with Worcester conceding a number of early penalties, it seemed Bristol were destined to open the scoring.

However, Worcester scored against the run of play after eight minutes with a determined Samantha Bree run, outpacing three defenders to make Ceri Large’s conversion under the post an easy task.

Worcester struck again when Kat Merchant and Steph Johnson linked up out wide to score a  few minutes later for a 12-0 lead. The visitors were then reduced to 14 players following a yellow card – the first of four in the game, three to Worcester.

A great step and break from flyhalf El Snowsill finally saw Bristol register their first seven points and Amber Reed converted and then added a penalty.

Bristol continued to up the tempo and a barnstorming run from Sasha Acheson saw her side score the next try. Reed then added a penalty for a 17-12 halftime lead.

The penalties continued to flow with both teams receiving yellow cards in the second half with ill-discipline disrupting the flow of play.

With Worcester again reduced to 14 players, Reed finished an entertaining attacking move to seemingly secure the home side's victory on 58 minutes, but at this point the visitors dug deep, found real belief, started to dominate possession and took the game to the home side with a wave of pressure in which Rochelle Clarke was magnificent.

Sophie Watkins demonstrated quick thinking to take advantage of space and put the visitors back in the game with try under the posts which Ceri Large converted.

However, Bristol secured a deserved victory with a late Kay Wilson try, superbly converted from the touch line by Reed.

Despite a strong first half, where they led going into the break, Lichfield remain winless after Richmond showed their class in the late stages of this game to win at a canter.

Lichfield captain Emily Scarratt slotted over the first penalty of the match after the hosts won a turnover deep in Richmond territory. Richmond had started the stronger with Lichfield forced to defend, but some astute kicking from Scarratt kept the visitors playing from within their own half.

A mistake at the breakdown from Richmond after 35 minutes gave Lichfield another penalty, over 40 metres out. Scarratt confidently kicked it over to extend the lead to 6-0.

A terrific line break from scrum half Mo Hunt prompted Richmond centre Jackie Shiels to knock the ball on. The knock on was deemed deliberate by the referee and so she was sent to the sin bin. Scarratt again opted for posts from but missed, but her side had another chance a minute later after an excellent surge up front allowed centre Vicki Jackson power through for an 11-0 lead.

Richmond got right back into it before the break when they managed to create and utilise an overlap which saw Jade Wong touch down in the corner for her first Premiership try. Abi chamberlain converted to take the score to 12-7 at half time.

Almost instantly after the break, Lichfield were awarded another penalty which Scarratt again kicked successfully to take the score to 14-7 but once more Richmond hit back with a score – this time a try from Elisha Dee.

With Scarratt forced off with an injury, Richmond then started to control the game.

It remained tight until the 60 minute mark when Claire Allan scored a hat-trick within ten minutes to give Richmond a 29-14 lead, the second of the three tries coming after a particularly impressive period of play with Jo Watmore offloading to Alice Richardson who then offloaded to Allan to score.

The crowd only had to wait three minutes to see the next try with Wong running an impressive switch with try scorer Watmore to take the lead to 36-14.

The final try came from one of Abi Chamberlain’s trademark runs before she offloaded to Watmore to take the credit and help Richmond record an excellent win.

Saracens continued their run of form and ran in six tries to beat a tenacious and young Darlington team.

Saracens saw the better of the opening exchanges, with the front row trio of Hilary Leith, Geri Thomas and Kerrie- Anne Craddock were prominent in their ball carrying, opened up the space for Mckenna on the 22m who danced around the DMP full back to score a wonderful solo effort. The Saracens pack continued to pressurise a long travelling DMP side and this was rewarded when Leah Carey  controlled the ball at the back of a powerful scrum, to push her side over for the second score.

Georgina Roberts rallied her team and DMP advanced in to the Saracens half off the kick off and won the turnover. Slick handling from Rebecca Scholes, complimented with the strong ball carrying of Sam Jamieson, forced Saracens in to conceding the penalty, which England fly half Kate Mclean gratefully accepted and knocked over a well taken penalty. DMP continued to pressurise and play their rugby in the Saracens half. DMP's speedster winger, Julia Hope, outstanding throughout, made big yards up the left and eventually was high tackled resulting in a yellow card for Saracens centre Hannah Cassey. DMP's Mclean again nudged the penalty over and took the scoreline going into half-time, to just 4 points.

Despite the great weather and both teams trying to play some open rugby, the error count was high for teams. Half time conversations for both teams were simple and direct and it was DMP who responded first when Julia Hope took off on a mazy run, to be brought down by a great try saving tackle from the Saracens scrum half, Leanne Riley. However, a neat offload to her supporting winger Jen Edwards was enough to put her in to the clear to score out wide and take DMP in to the lead 11-10.

Saracens pulled together and increased the tempo with substitutes, Lindsay Wheeler, Leigh Dargan and Kelly Wallis making big impacts. Their strong running and offloading made way for a trademark Alphonsi surge to score just wide of the posts which took the home team back in to the lead 15-11. This gave Saracens the momentum they needed resulting in further a fine score for the former Saracens Captain and returning Sonia Green, and then the ever present Alphonsi once again. An interesting last three minutes was witnessed as the impressive and alert Mclean took advantage of another Saracens penalty and scored with some quick thinking and a tap penalty to take the score to 25-16, a testament to the tenacious attitude of the DMP Sharks.

Saracens wanted the final say in their last game at Bramley Road before their permanent move to Allianz park, and fittingly it was the hard working Leanne Riley who dotted down for the last try on the whistle. Final score 30-16.

Wasps bounced back from defeat last time out to beat newcomers Aylesford Bulls, who are improving week by week at the highest level.

It was a busy day at Twyford Avenue with a girls rugby development day, in partnership with Middlesex Rugby, taking place before the game.

Nearly 30 girls aged 13-18 turned up to take part in a skills session and games run by the Wasps players which was followed by a Q&A session with some of the team’s England players.

The home side started strong against Aylesford, with some strong running and scrummaging leading to a try for number 8, Laura Quinn in the first 10 minutes. This was converted by centre, Hannah Edwards for the early lead.

Wasps retained possession for much of the first half, and second row Lois Newcombe crashed over the line to put them ahead 30 minutes in. Edwards added the extras again. Aylesford worked hard, but gave away a penalty within kicking range and Edwards stepped up and put 3 more points on the board for the girls in black and gold. At half time, Wasps led 17-0.

A lengthy injury stoppage came a few minutes into the 2nd half, but the home team remained focussed, with winger Becca Rowe scoring in the corner shortly after.

Just minutes later, Lynsey Douglas also got over the line for Wasps, putting them 27-0 up.

With five minutes left on the clock, Rowe broke the line to score under the posts, which was converted by Edwards.

Aylesford held onto the ball for the final few minutes, and looked threatening in the 22, however, sloppy play led to a penalty for Wasps. The ball was kicked off the field, and the final whistle was blown.