The second and final leg of the European Sevens Grand Prix takes place this weekend. There are several questions to be decided, but perhaps the most interesting is who will win Europe’s final places at the 2018 Sevens World Cup. 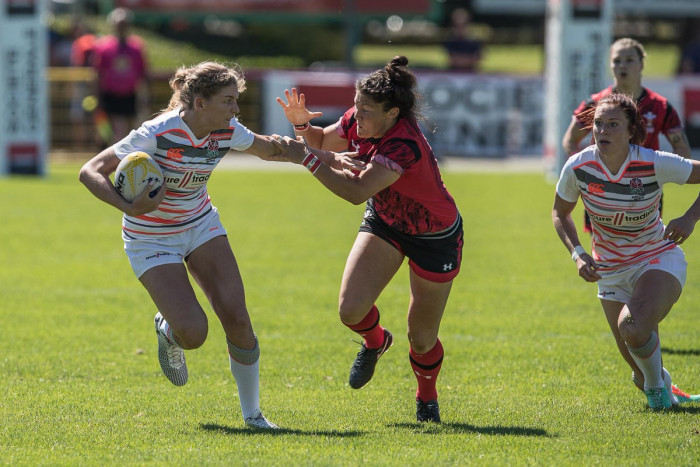 After the completion of the World Series in Clermont a fortnight ago we now know eight of the sixteen teams who will be in San Francisco next summer. From Europe these include Russia, Spain and France leaving just two spots for the continent’s teams, both to be decided in Kazan.

After the first leg in Malemort, Ireland are in pole position for one of these having finished third, beating England in the Bronze Medal match. While technically not certain of their place in ‘Frisco, Ireland would probably need to produce their worst performance of the entire year to miss out.

With Spain – already qualified – finishing fifth, England are also well placed as their greatest (and realistically only) threat – Wales – are two spots behind in the current rankings.

History tends to favour England as well. Only once has a World Series team lost to a non-World Series team in the European Championship (when the Dutch legendarily beat France a couple of years ago) and certainly no team without World Series experience has ever triumphed.

That said, no team has come closer than Wales who only went down to England by two points (12-10) in the quarter-finals in Malemort, having lead with only a couple of minutes to go. There is every chance that that match might be repeated at the same stage this weekend, in which case the game will be, to all intents and purposes, a straight World Cup winner-take-all Sunday morning shootout. And ten years ago Wales won the title – beating England in the final.

With the fifteens World Cup players unavailable, England coach James Bailey has selected probably the strongest team he could with the experienced Claire Allan returning to give him a squad with four Olympians, plus Millie Wood, World Rugby Sevens “Rookie of the year”, is also available.

Bailey said: “We have full confidence in the side selected which combines the experience of players who have played in major tournaments such as the Olympics, with younger players who have made their mark this season and bring a lot of energy to the side. Going into Kazan it’s now about translating what we have been working on over the past season into consistent performances across the weekend that deliver results.”

Coach Nick Wakley is still confident. "We've still got a strong squad, which is excellent”, he said – and looking back on the quarter-final in Malemort believes that it was a game that"probably deserved to sneak".

"The team is starting to build belief now, a lot of which is down to their hard work," he continued. "We went on to play Spain, a World Series team, and although they won 19-10, there were points in that game where we pushed them to breaking point. We put them under huge pressure. We've played some excellent sevens and we're definitely making strides."

They are leaving nothing to chance – “it's the first time we've got footage of our opponents which means we can be much more tactical in this tournament, which is great. We've had plenty of time to analyse our opponents. If we want to win a place on the World Series [which, for 2018-19, will only be possible via the World Cup] being able to efficiently analyse the opposition in great detail will be part and parcel of that."

Of course, England vs Wales is not the only matter to be decided – there is the small matter of the title itself, with Russia aiming to lift the title on their home soil, and France aiming to stop them.

Based on form, and also lack of distractions, Russia are clear favourites – and home advantage has certainly never done them any harm either. They called up a pretty much all of their available players for a training camp this week – a further indication that they are taking this very seriously.

France are also distracted by upcoming matters in Ireland. The French squad is certainly not lacking in experience, despite none of their XVs World Cup players being available, but even so it is hard to see how they will beat Russia, who were comfortably the best European team in the recent World Series.

At the other end of the rankings four more teams will be battling this weekend to avoid the drop.

For the Netherlands the trapdoor beckons – a remarkable possibility for the former World Series team that only two years ago had the Olympics in their sights. Lorraine Laros is back, however, with the experienced Marsha Völker and Erin Arends back from injury as well.

For once, the draw may be on the Dutch side with key opponents - Italy - also prioritising Dublin. On paper the Dutch really could – even should – beat this Italian team, and if that won them a quarter-final spot then their worries would be all-but over.

Portugal also faced regelation after 11th in Malemort, but have the far tougher prospect of Belgium to overcome (not to mention France and Spain) if they are to reach the quarters.

Belgium have yet to announce their squad, but have the potential to be difficult opponents and might reasonably expected to improve on 8th in Malemort – so Portugal will not find their meeting easy.

It is possible that Spain may be a better hope for a Portuguese pool win as they too now have more an eye on Dublin. Eusebio Quevedo has needed to call up a raft of new players to replace XVs call-ups in and injuries, so unfamiliar names such as Carmen Olias, Maria Marin, Maria Garcia and Laura Lorenzo de Cisneros were in this week’s training XIV. On the plus side Elizabet Martinez and Enara Cacho have recovered from injury and are available, along with Olivia Fresneda. Other players in the running for selection are Barbara Garcia (Olimpico), Ingrid Algar (Sanse Scrum), Lucia Diaz and Carmen Rodera (Majadahonda), Raquel Garcia Godin (INEF), Maria Calvo (Tecnidex Valencia) and Nerea Agirre (Getxo).

If Portugal and Netherlands do manage the great escape, Sweden and Poland are next in line. Poland had a magnificent opening day in Malemort and will have been very disappointed to end up 10th.

They are drawn with rivals Sweden in Pool C, and the winner of their game could win safety. However they are also both up against Ireland and England, who will battling for every point. Both could yet find themselves in the Challenge, and neither can afford to relax.

All games should be available live here and scores here.