Tomorrow (27th February) is a red letter day for supporters of women’s test rugby with the reformation of the European Championship. 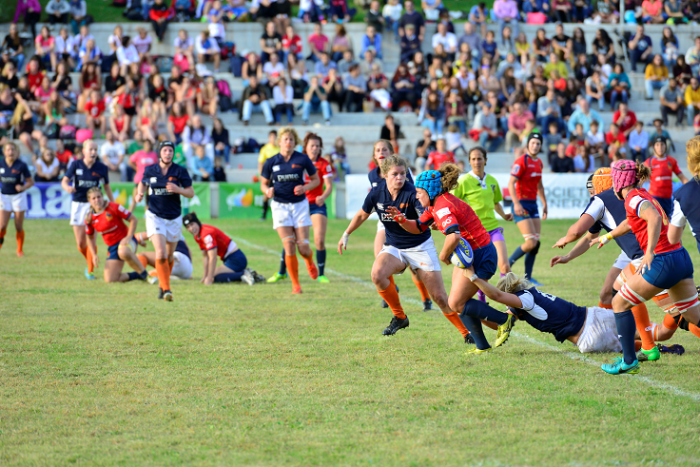 The world’s oldest women’s rugby tournament is revived this week after a six year absence. Belgium, Germany, Netherlands and Spain will compete for the first European Championship to be held since 2012.

First held in 1988 the European Championship was competed for almost annually from 1995 to 2012, with 16 teams taking part at its height. The rise of sevens was mostly to blame for its demise, coupled with the departure of Six Nations teams (mainly England and France) who used to enter their “A” teams in the tournament – or even their full teams once every four years.

Since 2012 a “European Championship” has only appeared in the fixture list in 2013 and 2016 when it acted as the continent’s World Cup qualification tournament. The only annual XVs rugby tournaments organised by Rugby Europe since 2014 has been second level European Trophy.

The revival of the tournament is mainly due to the efforts of Spain who wanted to organise a Four Nations, to run alongside the Six Nations. However, the cost of a tournament spread over three weekends with teams having to travel around Europe proved to be too expensive for most of their rivals.

As a result a single event for four teams, with semi-finals and a final, has been organised. The semi-finals will take place tomorrow in the Pachy Stadium in Waterloo, with the third-place game in Friday at the same venue, and the final at Petit Heysel in Brussels as part of a double-header with the men’s European Championship between Belgium and Germany.

Spain start as clear favourites, though with their Sevens players absent they will not be quite the force they were in the World Cup. Even so it would be a huge upset if they failed to lift the trophy on Saturday.

They will face Germany in the first semifinal at 6:00pm CET.

For their semi-final opponents – Germany - this will be their biggest challenge since the teams was reformed only last year. National coach Alfred Jansen and Marcus Trick have now nominated a strong squad fresh from their 65-0 win over the RAF.

"Although there are five or six players we would have have had to cancel due to injury, we have here the best players in Germany together, a good and highly motivated team," emphasizes national coach Marcus Trick. "The mood is good, and our the preparation has gone well."

"Our goal is to win at least one of the two games," says Coach Trick. "Even if we are the clear outsider against Spain, we will not give anything away, but we will try everything to land a surprise."

The Netherlands are favourites to meet Spain in the final, not least following their performance against the British Army in January where the speed of their backs, many with World Sevens Series experience, impressed everyone who saw the game. They too include two players from the English Premiership - Tessa Wijmans and Samantha Martinez Gion, who both play with Saracens, as well as Nikki Weijers who plays for Dendermonde in Belgium. Their opponents will be the hosts Belgium, who they beat 39-17 in an uncapped international in November 11 last year.

Belgium’s coaches Renaud Labardant and Xavier Bossert four changes from the teams that played the Dutch in November - Laurie Prignon, Alison Lenaerts, Elodie Musch  and Jozefien Beckers. Unlike their opponents, Belgium do not have any players based in England, their only overseas-based player being Elodie Musch who plays for Perpignan in the French Armelle Auclair