New Zealand are the Oceania Champions, winning the title without conceding a point today after a 131-0 win against Papua New Guinea followed earlier 53-0 and 50-0 wins over Fiji and Australia A. 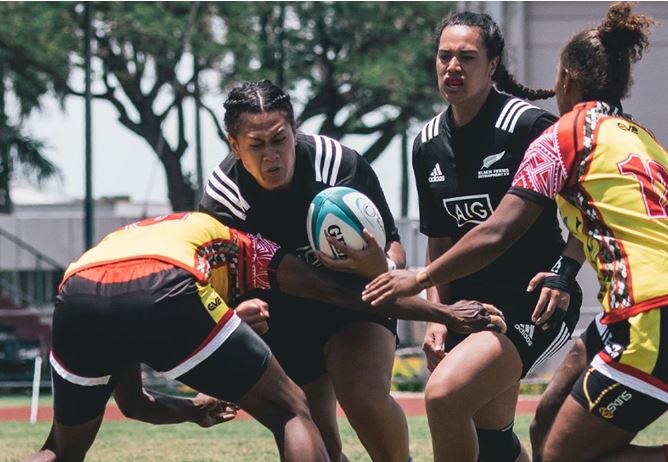 Head coach Wayne Maxwell said the Oceania Championship had been a great platform to develop new players and put them in an environment where they were tested: "It's been very helpful to have some good quality games, the score must not have reflected that today, but I know that both teams put their best on the park," he said. "The Farah Palmer Cup back home is a strong competition in New Zealand but this tournament takes it to another level to actually see who is willing to shift up, so the players are open minded about they are needed to do."

Papua coach John Pangkatana offered no excuses when asked yesterday about the huge loss. "We take the loss as part of the process of a newcomer to the 15s at this level, despite it being our third to compete in.

"We are not ready to compete competitively without having a strong local competition to draw players that can handle playing at this level.  And that's not to mention about how the modern game has progressed as well.

"We are nowhere near that stage, but we are thankful that a corporate sponsor in ANZ has come onboard that will now allow all target players to go on a high performance periodised program over six to eight months."

“It’s never good to lose by a massive scoreline, but that's just the nature of PNGs progress in women's 15s rugby. We just have to accept it, bite the bullet and move on to ensure our development programs and club rugby to the introduction of the first ever national provincial championships next year are on par with the rest of the world.

"It's been very helpful to have some good quality games, the score must not have reflected that today, but I know that both teams put their best on the park".

Australia A defeated Samoa 27-5 in the later game to finish in third place behind hosts and two-time champions Fiji, with Samoa, PNG and Tonga rounding out the finals standings.

Oceania Competitions Manager Wayne Schuster said Pacific Island nations had welcomed the chance to test themselves against teams from New Zealand and Australia over the last two weeks. "It essentially adds another dimension to the performance preparations for these teams and will build their performance and gauge where they are, their standards for further years to come," he said. "So, we're looking forward to Australia and New Zealand committing to our annual program and certainly the Pacific will be better for it."

Samoa and Fiji will playoff tomorrow for a place at the World Cup, while Papua New Guinea will play against a Fiji B team.

In the revised qualification progarmme,Tonga will now travel to Papua in February for the first of two playoff games to decide Oceania's team in the repecharge tournament that will decide who the 12th and final qualifier will be. The winner of the Papua/Tonga test will later play Fiji or Samoa to decided who that final repecharge team will be.