A flurry of first half tries were enough to see France run out comfortable 5-33 winners over France in Cardiff on Friday night. 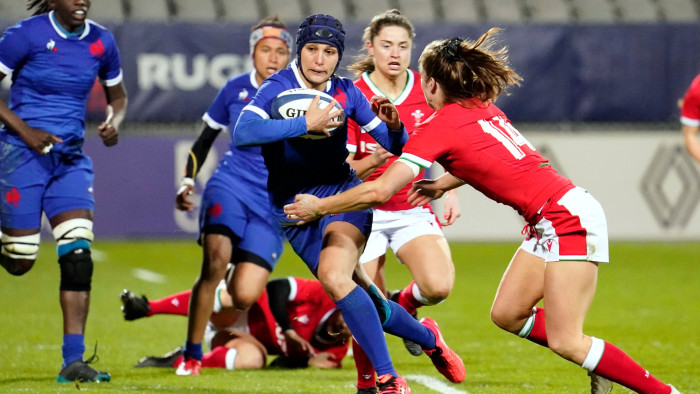 Laure Sansus orchestrated an excellent first half of rugby for the visitors as the home side were ultimately frustrated, having failed to capitalise on multiple scoring chances throughout the game.

The result means that the Grand Slam decider in Bayonne against England is very much on, presuming that the Red Roses beat Ireland in Leicester.

With Jessy Trémoulière mixing up the game at 10, france started well and were immediately camped inside the Welsh 22, where they stayed for much of the first 40 minutes.

With a strong driving lineout, space was created for Sansus to ghost through a few defenders to grab the opening score.

Then Trémoulière's found the returning Caroline Boujard with a cross-field kick and the winger just about managed to touch it down to help her side into an early 0-14 lead.

France then turned on the style with a brilliant score from full-back Chloe Jacquet. She took the ball deep inside her own half, beat a couple of defenders, exchanged a few passes with Sansus and then turned on the after burners to spring away before touching down in the corner.

Sansus then had her second when Wales lost control of the ball at the base of a five-metre scrum, and in the confusion she was on hand to grab it and dot down under the nose of her opposite number Keira Bevan.

With Madoussou Fall and Celine Ferer doing brilliantly to marshal things up front, any Welsh chances were snuffed out through strong defence and pressure at the breakdown.

Wales though emerged into the second half in better form, starting well with Siwan Lillicrap and Alisha Butchers promiment, but to the crowd's frustration, none of the chances came to anything.

France then made it 33-0 when Trémoulière raced through totally unopposed across the face of the Welsh backlline.

Wales were down but not out and had their best spell of possession as the game entered the final ten minutes. Sioned Harries and Ffion Lewis were excellent off the bench and Harries got her just rewards with an excellent finish to get Wales on the board in the final play.