France began their Autumn test programme with a big win against South Africa.  as  the Women Boks started their European tour. The game allowed France to give caps to five new players as they prepare for two tests against New Zealand. 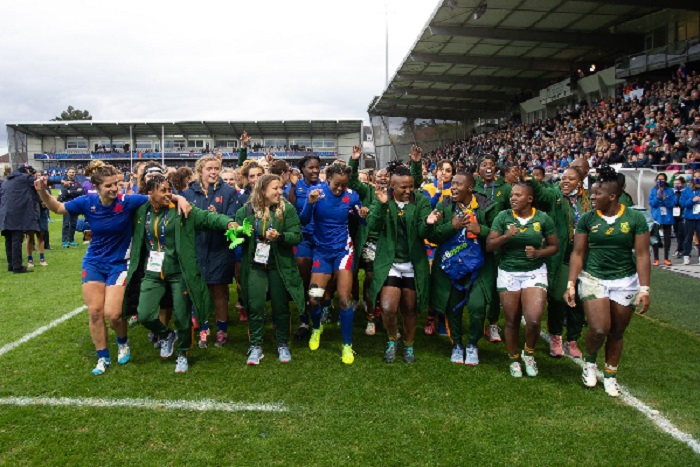 This first match of the Autumn programme brought France back to Vannes and the Stade de la Rabine where Les Blues had beaten Wales 55-10 seven months before at the start of the Six Nations.

The French dominated the opening encounters, and soon Caroline Drouin opened the scoring by with a well-struck 30m penalty. Shortly afterwards a series of three consecutive scrums saw the French march to the Springbok 5m line, from where Emeline Gros broke away for the first try. The speed and strength of the backline doubled the score and after 16 minutes, France had already taken a 17-0 lead.

Both possession and occupation were now very largely in favour of France team and third try was pure French, with South Africa having no answer to a maul from a lineout, Laure Sansus getting the score, and then just before the break Safi N'Diaye finished a wonderful flowing move starting from a scrum near halfway for a fourth French try.

The second half continued on the same basis with a solid and disciplined France XV, their powerful pack and an impeccable handling and another French gave N'Diaye her second try just two minutes after the restart once again shines after a demonstration of the power of the French pack.

WIth five unanswered tries on the board the French management began to experiment and rest key players. As a result it was not until the 60th minute before Caroline Boujard got the scoreboard moving again finishing a good movement of three-quarters by scoring in the corner. France now lead 39-0.

The end of the match was much like the start with French in control. With eight minutes to go debutant Melissande Llorens showed her speed, leaving the Springbok defence in her wake for her team’s seventh try before right the end South Africa took advantage of a penalty to ensure that then did not end the game pointless. Final score France 49, South Africa 3.