Have France managed to provide a blueprint for how to beat England? 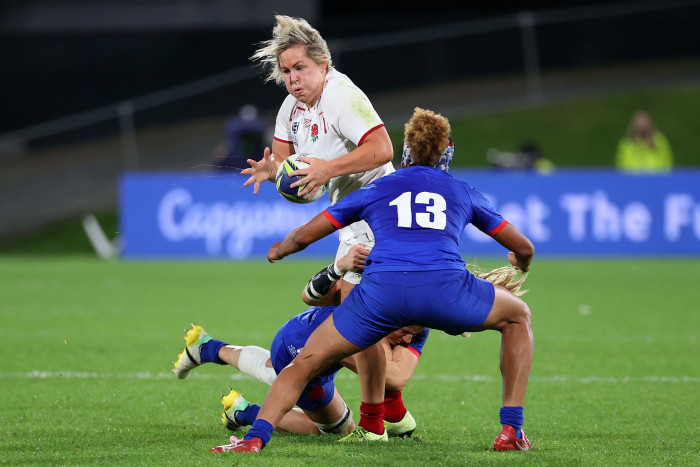 The trouble with being overwhelming favourites, is that everything you do is pored over like every single match is a Cup final.

And it’s because of that, that England will likely find their performance in the narrow win over France scrutinised in a manner disproportionate to where it has come in this World Cup.

For England are already into the quarterfinal after just two matches and will have a chance against South Africa next weekend to rest and rotate their squad.

Apart from failing to get a bonus point against the French, it’s surely exactly where they want to be.

But the expectations on this world-record breaking English team are now so high that some of the analysis after the game sounded a bit like they had lost.

Alongside a lung-busting defensive effort, have France managed to provide something of a blueprint for how England could perhaps one day be beaten?

Highlighting some vulnerabilities in Simon Middleton’s squad in both style and personnel, the coaching teams from New Zealand and Canada will have been watching how France went about their business with some zeal.

So what did they do so well?

First they tried to nullify two of England’s key strengths – their driving lineout and their efficient breakdown.

We all know what an asset England’s driving lineout is, but France succeeded in removing it as a weapon.

England had 21 lineouts over the 80 minutes, and every time they got near their own 22, they attempted to catch and drive all of them.

This is sensible when you remember that normally when England get a lineout anywhere in the opposition 22, their try success rate is 48% but France knew what was coming.

Offering no meaningful contest in the air, they chose to keep the feet of all eight players on the ground and collectively drove straight into the player in white who landed with the ball.

With heft behind them, it meant that England struggled to build any momentum with no return for their effort.

When you speak to players who play against England regularly, they say that even when you’ve done every bit of homework imaginable, the pace at which they relentlessly attack is impossible to prepare for, and after a few phases, equally impossible to quell.

Knowing just how much England’s attack relies on disorienting defenders, for much of the match, France decided not to contest at all, preferring to let England have as much possession as they wanted.

While England continued to commit three or four players to each breakdown, very often France had no one at all in, with the tackler having immediately rolled out and bounced back to her feet.

With hardly anyone committed to the breakdown, it allowed France to outnumber England in defence, and that, coupled with some quite brilliant pressing and tackling, meant that England’s attack looked quite containable.

The harder Gabrielle Vernier and Marjorie Mayans tackled, the more tenacious France became, drawing motivation from the fact that England had the vast majority of the ball (in fact 68% of it) but could do very little with it.

Only when the ball was there to be won immediately did France attempt to contest, helping them to grab a few brilliant turnovers at crucial times.

For a team that made a quite remarkable 214 tackles to England’s 74, France were also extremely disciplined, conceding just 11 penalties, the same number as their opposition, meaning fewer opportunities for England to get into their 22.

In her post match analysis, the brilliant former England flyhalf Katy Daley-McLean, bemoaned England’s lack of a ‘Plan B’.

It’s true that when England couldn’t outmuscle France they looked a little ordinary and it’s also true that having chosen not to bring the enigmatic Natasha Hunt with them, England had no proven playmaker on the bench to try and mix things up.

But the fact is that England were handed a huge test and they passed it.

France for all they impressed defensively, especially when they lost two of their best players, looked rather like a team that came to try not to lose and not a team set up to try and actually win the game.

Apart from their brilliant try, their own attack was muted.

With Zoe Harrison showcasing her fine kicking range, England held on, reminding everyone that you can take away some of their key strengths, and it still might not be enough.