Defence was the name of the game in the first test between France and USA with the hosts coming out on top 13-0. The game at Stade Marcel Garcin was a real battle between these two sides who play again this weekend. 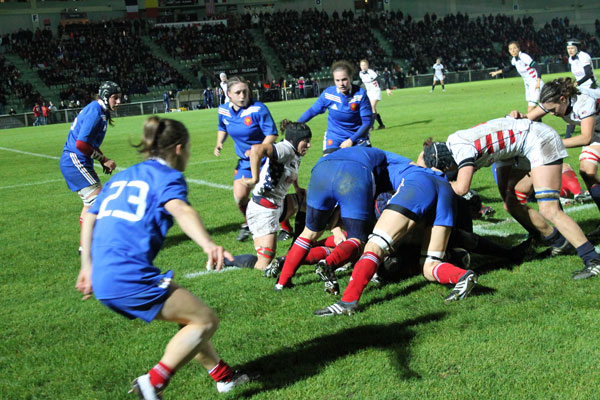 Young French fullback Jessy Tremouliere kicked two penalties and converted a penalty try to seal the win for the home side, who featured a host of new faces in their starting lineup.

USA were undone by a high penalty count which gave France good opportunities to relieve pressure at key times.

In a first half where neither side could get beyond staunch defences France had two shots at goal with Tremouliere slotting the second just before halftime for a 3-0 lead at the turnaround.

USA went down a number of players to injury earli in the game with Amy Daniels coming on after seven minutes for Kaelene Lundstrum and Meya Bizer was also forced to step away from play for a short period due to a cut under her eye.

Minutes into the second half, Tremouliere made the most of yet another kicking opportunity from deep within US territory, connecting well with the boot to further Frances lead, 6-0.

But France pressed hard on the USA line and after holding the ball up well initially a penalty try was awarded for a scrum wheel just five metres out to give France a 13-0 lead.