For two years the Lons' Stade Municipal du Bourg has been impregnable fortress in France’s top women’s league, but on Sunday it finally cracked. 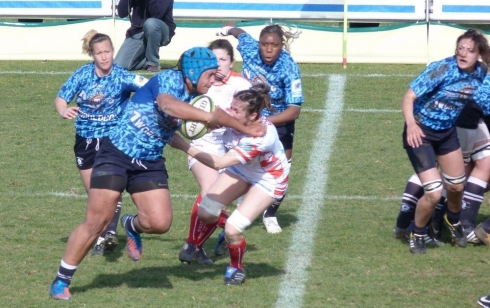 It was the game of the round – leaders Montpellier against third-placed Lons, with only a single point separating them, and close to a third of the French squad on show.  And at the start the game seemed to be going the way of the home side, as Casenave converted a penalty in the opening minute, but after that the game steadily moved towards the visitors.

It was one of the stars from Twickenham who make the breakthrough. On 13 minutes, and from a scrum on the Lons 5m line, Safi N’Diaye picked up the ball and crashed through the Lons line to score.

Lons held on to a 3-5 deficit until halftime, but soon after the break it was N’Diaye again crashing through to put Montpellier 10-3 ahead.  Lons briefing responded with a try from Chobet to level the scores, but within two minutes N’Diaye completed a hat-trick – this time converted by Aurelie Bailon, who came on for the final 30 minutes.

Then, with ten minutes left came the vital score – Vidal was first to a kick ahead from Troncy that gave Montpellier the bonus point, and a 27-10 victory.

Montpellier’s rivals for top spot – Lille – had, on paper, a slightly easier journey to maximum points, with a 28-5 win. However bottom placed Sassenage made them fight all the way, even scoring the first try and holding Lille to 8-5 at halftime.

But the second half was dominated by the northerners. A penalty try early on extended the lead, before defensive errors at the end allowed Lille in for two more tries, and the vital bonus point that keeps them level at the top of the table.

Elsewhere Perpignan held on to fourth place by the skin of their teeth. In a low scoring game at Bordeaux, the 2011 champions lead up the 74th minute thanks only to a first half penalty from Le Duff.  But then Stade Bordelaises’ Le Naour burst through the Perpignan line, releasing Lagougine who in turn passed to Grassineau to touch down in the corner. 5-3 to last year’s second division champions.

And so it remained up to the final play of the game. Perpignan crashed against the home defence again and again until the pressure finally told, with a penalty, but not an easy one - 40m out. But Le Duff was equal to the task, giving Perpignan the game 6-5. It was a vital win, as Caen beat St Orens to remain only four points behind in fifth place. Caen could still be a major threat to Perpignan, not least because they have four home games left, whereas Perpignan have only two.

Other news from the game was the successful return to rugby of Claire Canal, after nine months out following a knee injury in the play-off semi-final last June. A key player in the past for Les Bleus as well as Perpignan, her rehabilitation will be watched with great interest by the national team management.

The final game of the day saw Bobigny end Rennes slim hopes of top four place with a 27-12 win.

Away from activities on the field, the financial pressures faced by France's top clubs has come to a head at St Orens. Jean-Michel Llanes - the president of the team - told La Depeche that - though he has been delighted with the progress the team has made since its promotion three years ago -  the cost of running the team, and in particular the cost of travel (€50,000 - €60,000 per year) may result in the team having to move to another club. Despite the support of the club and city of St Orens (on the outskirts of Toulouse) - not to mention the 500 spectators who follow the team home and away - there is very little left in the budget.

There is a growing trend for women's teams to be adopted by larger men's clubs. Perpignan took over Toulouges team a few years ago, Pau support Lons, and Montpellier and Bordeaux are linked to their professional clubs. Unfortunately the Toulouse club "believe that women's rugby is not rugby" and will not support the team - but Blagnac (some 20km to the north of St Orens, on the other side of Toulouse) have shown an interest, and negotiations are taking place.