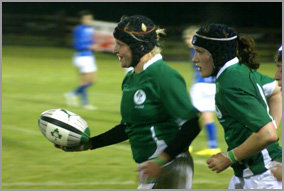 Ireland finshed their 6 Nations with another fine home win in a tight 15-3 contest against Scotland.

The win means that Ireland have chalked up victories at all of their home games this season and Kevin Wests side will be pleased to beat Scotland, Wales and Italy in a World Cup year and finish the 6 Nations in third spot.

Ireland were led out by Jo OSullivan who was winning her 50th cap for her country on a wet night in Co Meath.

The rain teemed down on both teams as they ran onto the park but despite the slippy conditions Irelands early offloading game was impressive with number 8 Joy Neville (pictured)and fullback Niamh Briggs prominent in the opening exchanges.

The first half was frustrating for the most part with referee Herve Dubes very quick to reach for his whistle.

Scotland dealt with the early Ireland attacks well though and upped the ante when a comfortable scrum set number 8 Susie Brown on a charge and then centre Lucy Millard combined impressively with wing Lynsey Douglas.

The attack end in nothing but was enough to show that Scotland had improved from a big loss to England the week before and were determined to make Ireland battle throughout.

The Scots then had the first chance to put points on the board when Nicola Halfpenny had a shot after a half an hour but her effort sailed wide.

Ireland heeded that warning though and charged into the Scottish 22 for the first time in the match with a nice break from Helen Brosnan helping to set up Niamh Briggs for a first penalty effort which she made no mistake with to give the Irish a 3-0 lead.

Scotland replied just before the break when Sinead Ryan was harshly penalised by Dubes and this time Halfpenny put it over to take the sides level.

Ireland came out firing after the break and when Scotland made a hash of clearing a penalty effort from Briggs, the home team seized the advantage with a neat maul and a quick pass to Nora Stapleton saw the winger touch down to push the home teams advantage to 8-3.

Errors started to creep into Scotlands game with Ireland keeping the pressure on and a lovely burst from JoO Sullivan helped them gain a good foothold in the Scottish half. The pressure paid off when Ireland got their maul going and Tania Rosser laid a nice pass off to flanker Sinead Ryan who touched down. A super convertion from Briggs gave Ireland a 15-3 advantage.

Scotland battled gamely and there were some nice flashes from Millard and Brown, who had a fine match, but it was too little too late. Gary Parker though will be much happier with the endeavour shown by his side in this game, on the back of a big loss last week, and in the first half especially Scotland were well matched with Ireland.

Ireland ended the game on the attack with an excellent break from Briggs and it was a fitting end to an very good tournament for the fullback and her team.

*In our initial match report we named Donna Kennedy with Susie Brown which we've since amended - apologies for anyone who misread it. Blame the pouring rain and a long road trip!