It was a dream finale for Ciara Griffin as she was named player of the match and scored twice as Ireland beat Japan, but they scraped through winning 15-12 in a game that could easily have lost. 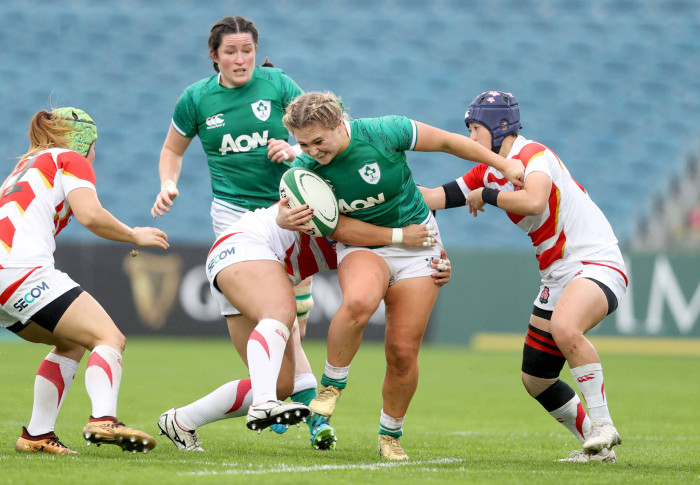 Griffin played the game of her career with superb carrying and tackling throughout as she dragged Ireland back into a game they once trailed 12-3 but it was not a strong overall Irish performance and Japan will feel rightly unlucky they didn't come away with what would have been a shock result.

Ireland had made eight changes, some enforced because of sevens commitments, and it showed as they struggled to get a foothold with all of the changes they had made.

Enya Breen kicked a sixth-minute penalty after a decent start in poor conditions, and it was quickly clear they were superior at the set piece but they failed to capitalise.

Japan were doing what they could to avoid scrums and lineouts and it made for an entertaining game as they ran from everywhere, being rewarded with a great opening try.

Kanako Kobayashi burst through a tackle and with Ria Anoku and Mana Furuta providing support they crashed over for a great team score.

Ireland then lost number 8 Hannah O’Connor’s who was red carded because of a dangerous collission with the head of a Japanese player and then the visitors scored again when some great offloading was rewarded when Seina Saito scored and Ayasa Otsuka converted.

Ireland were 12-3 down at the break but were much improved when they came back out.

First Griffin blocked down Otsuka’s clearance and then she dived over after a strong pack effort for her second.

Linda Djougang was impressive as Ireland started to dominate up front and Japan turned down a late shot at goal to level things up as Ireland just about hung on.