Ireland’s U18s finished a memorable weekend for the women in Green by becoming the first U18 Home Nations champions last weekend. 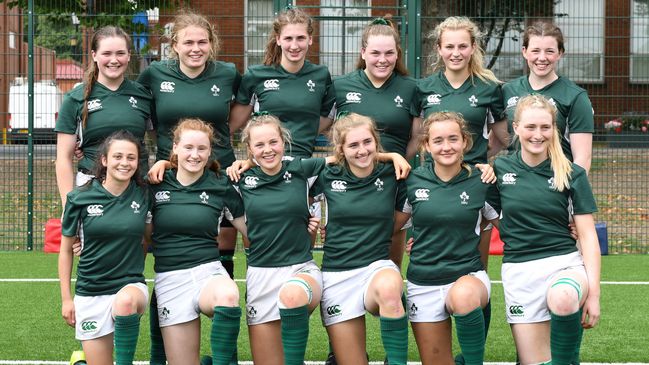 The University of Birmingham was the venue for the second and final leg of the inaugural Under-18 Women's Home Nations Sevens Series, and Ireland were looking to keep up their winning form from the opening tournament in Edinburgh two weeks ago.

Coached by Adam Griggs and managed by Elaine Ryan, Ireland excelled again to remain unbeaten throughout the two weekends and underline their dominance of the competition. They came from 17-5 down at half-time to overhaul Wales late on in a fiercely-contested opener in Birmingham, and also held off a strong second half comeback from hosts England to win the final 28-19.

It was Ireland's well-honed skills, composure on both sides of the ball and eye for the try-line which marked them out as the leading team. They chalked up 23 tries during their five games in the West Midlands, just one less than their Edinburgh tally, and again it was Ballinasloe's Beibhinn Parsons who led the way with nine tries, including a hat-trick in the decider against England.

Parsons, who made her Ireland debut in the bronze medal-winning side at the Europeans in April, top-scored with a fantastic haul of 15 tries over the two-legged Home Nations competition. Captain Anna Doyle and Megan Burns notched four each in Birmingham, but it was very much a squad effort in terms of try scorers and try creators.

Tullow speedster Doyle was delighted with how the tournament panned out, saying: "I think as a team we had high hopes coming into this tournament as we wanted to retain our unbeaten streak. We had to step up our game this weekend as we were tested in every match.

"But we worked hard for each other which paid off in the end. It was a great experience and everyone's delighted with the outcome and the improvements we made individually and as a team with the help of our coach Adam and the management."

Griggs, the Ireland 15s head coach who joined the IRFU High Performance Unit Women's Programme in April, told IrishRugby.ie: "This weekend the challenge for us was backing up such good performances from Edinburgh. As always when you're defending champions, all your opposition lift their game when they play you and they put us under real pressure throughout the five games.

"The standard of rugby was much higher again and twice we had to come from behind to get our wins. There is true character and pride in these players which is something a coach cannot give them and is hugely exciting as we track the players development.

"It took a huge squad effort from all twelve girls who were led superbly by Anna once again and special mention must go to Beibhinn Parsons who was the tournament's top try scorer. The squad now goes back to their provincial set-ups and we look forward to watching them in the upcoming Interprovincial Series in September where I'm sure they'll carry on the hard work they've put in over the last month."

With players like Mullingar's Meadbh Scally stepping up with tries against Wales and Scotland on day one, the growing depth of talent saw 15 players get game-time over the course of the series. They have revelled in international competition, winning the UK School Games and Home Nations titles and European bronze all in the space of 11 months.

Six members of the Birmingham squad won the UK School Games last September alongside Eve Higgins, who has gone on to have a stellar first season in the Ireland senior set-up, capping it off with two tries at this weekend's Rugby World Cup Sevens in San Francisco. From club, school and province to the green jersey, the Sevens development pathway is delivering performances and results to be really proud of.

They got off to a winning start on Saturday at the University of Birmingham-hosted tournament, with a 46-0 win over Scotland before losing 7-31 to Ireland.

In their final game of the opening day England drew 17-17 with Wales after tries from Lucy Burgess, Ella Lovibond and Flo Robinson.

This led them to face Wales again in the first play-off on day two, with England coming away 26-5 winners following tries from Shauna Bennett (2), Amelia Harper and Lucy Burgess.

Team coach James Cooper said: “The two legs of the Home Nations U18 Sevens have been hugely beneficial. It has allowed us to give 20 players experience of international rugby, many for the first time. It will have highlighted to them areas of strengths and areas to improve within their game, how to prepare before, during and after competition with the different pressures and demands that come with that.

“Thank you to the University of Birmingham for hosting us and the numerous volunteers who came from local clubs and the Worcester Centre of Excellence to help make everything run so smoothly.”

Wales coach Jonathan Hooper says he's delighted with his team's second outing in this year's Home Nations U18 Sevens, despite their third place.

The former Wales Sevens player believes it was another productive experience for this talented group of players at Birmingham University. "We had a great start on day one, racing to a 15-0 lead against [overall winners] Ireland who eventually battled back to seal a win on the last play."

Wales were able to let loose in their second match with a resounding victory against Scotland - "a game that showed our attacking flair," according to Hooper - before finishing the day with a 17-17 result against England. It was a game Wales could have won, with England scoring a late try to salvage the draw.

England would gain the upper hand on day two, for which Hooper gives them credit. "They started strongly and prevented us from playing our exciting, expansive game."

The Home Nations tournament would end on a high note for Wales, though, as they finished with another victory against Scotland.

"It was a superb learning experience for all of our players, five of whom will now be involved in our senior training squad," Hooper says. "The developmental outlook of the squad was exemplified by the fact that seven of the 12 players will still be eligible for the U18s next summer."

Scotland may have ended in fourth place but Coach, Graeme Blackhall, still saw plenty of positives coming out of the event.

“The girls have learnt a huge amount from their experiences this weekend and I can only praise them for their attitude and determination,” he said. “Although the scoreboard didn’t always reflect their efforts, they should take massive confidence from how far they have come as a squad.”