After the toughest of weeks off the field, Ireland did their talking on it with a gutsy 20-10 win over the USA, in their first outing at the RDS. 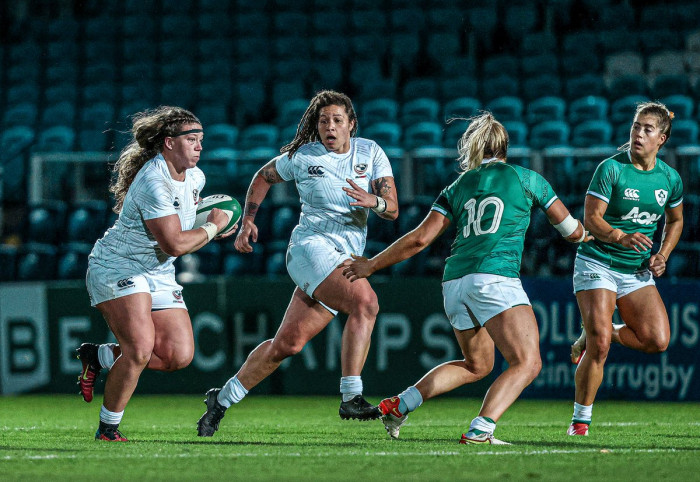 Led out by Lindsay Peat who is expected to retire, Ireland started brilliantly up front, piling on pressure at the scrum in particular, with Peat and Leah Lyons far too powerful.

They were lucky though not to concede the opening score when Tess Feury made a neat break and offloaded to Bulou Mataitoga in space only for the winger to knock it on with the line at her mercy.

The USA's handling was a problem for the visitors, and the effort of two games in five days and then a flight to Ireland will no doubt have weighed heavy in their legs.

When Ireland did score, it was a beauty.

Stacey Flood booted the ball into space for the brilliant winger Beibheann Parsons, who didn't need to be asked twice.  With the ball bouncing nicely for her, she raced away to finish, with the crowd roaring their appreciation for Ireland's most marketable star.  At just 19, if managed well, Parsons is destined to become an Irish great.

The USA hit right back with fantastic carrying from the impressive duo of Hope Rogers and Alycia Washington who worked together to create some space for hooker Saher Hamdan, who twisted over the try line only to have the well worked score ruled out for a knockon.

They came again though and when the pack did the work up front, the ball was spun wide for Mataitoga to get her try this time.

Ireland restored their lead impressively just minutes later. Off an excellent lineout, where Nichola Fryday was impressive, Leah Lyons wrestled her way over to score.

Flood nailed the kick and it meant Ireland were 12-5 in front at the break.

After the turnaround, the USA scored a brilliant try of their own with the ball going through multiple hands and offloads before Elizabeth Cairns dotted down and Ireland were then very lucky to hold the lead when the TMO denied the USA a try which looked good.

Flood kicked a late penalty to secure the win and the Irish players celebrated long after the final whistle after the toughest of weeks.