Every woman who has represented Italy in 28 years of test rugby gathered in Rome on Saturday for a very special occasion - and a very special photo opportunity. 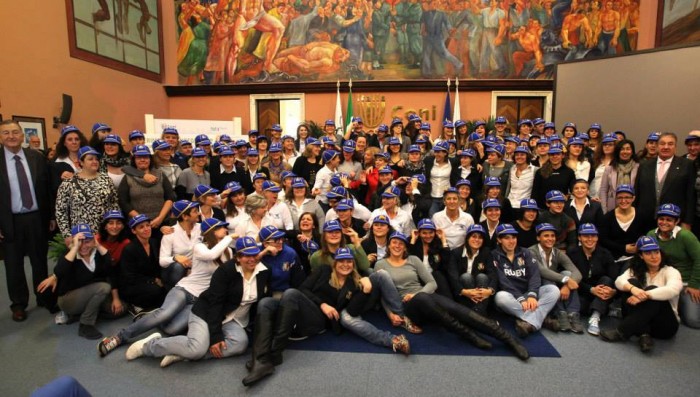 All of Italy's 161 test players  - with their new caps

The Italian Rugby Federation (FIR) was celebrating the contribution made by its women's rugby test teams over the past 28 years on Saturday by awarding caps to all of the 161 players who have worn "l'azzurro".

The awards were made in the Hall of Honour at the Olympic Stadium in Rome before the Italian men's fixture against Argentina, and were presented by Federation president Alfredo Gavazzi. It follows a similar presentation made to all of the surviving male players in February.

Italy were the fourth country to play women's test rugby (after France, the Netherlands and Sweden), their first test match - against France - taking place in Riccione in Italy on 22nd June 1985, The result was a 0-0 draw - a scoreline that has never been repeated.

Since then Italy have played 110 tests, winning 37 and drawing two. They joined the Six Nations in 2007, and had their most successful year in the tournament in 2013 with wins over France and Scotland, and narrow defeats to Wales and Ireland.

More photos from the presentation