Italy recorded their biggest ever 6 Nations win with a 45-5 victory over Scotland to make it two wins from three in this year's tournament. 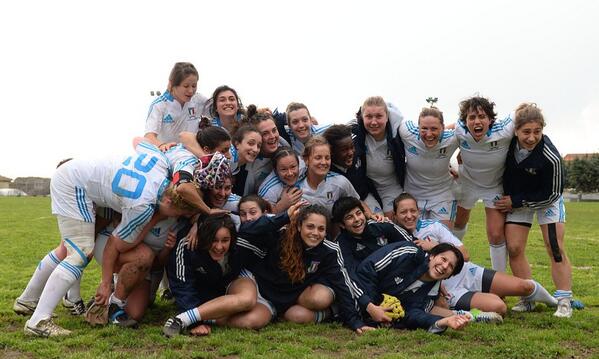 Scotland can take some consolation in scoring their first try in the 6 Nations since March 2012 when they grabbed a late score but the majority of the match was one-way traffic.

Italy's pace and power was too much for Scotland to handle and the host side almost scored in the opening minute only for a spilled ball to stop their attack deep in Scotland's 22.

It was to be a preview for the rest of the match as the Italians spent most of the game inside Scotland's half, save from that late Scotland try.

Ilaria Arrighetti and Michela Sillari , the player of the match,scored the first two tries with ease with accurate convertions from Schiavon to make it 14-0 within the opening 20 minutes.

Fullback Manuela Furlan raced over out wide of the third before after half an hour it was the turn of Beatrice Rigoni to break a tackle and score to make it 29-0.

Scotland defended better as the half came to an end but after the break another Schiavon penalty made it 32-0 and then live wire scrum half Sara Barattin raced over from the back of a well driven scrum. The game was already well beyond reach before Italy scored again but Scotland did finally make some waves in attack.

"I asked  this week for higher concentration especially at three-quarters and the team rose to that.  There was a little  lapse in concentration at the end but it was normal after playing the attack the way we did throughout the game."