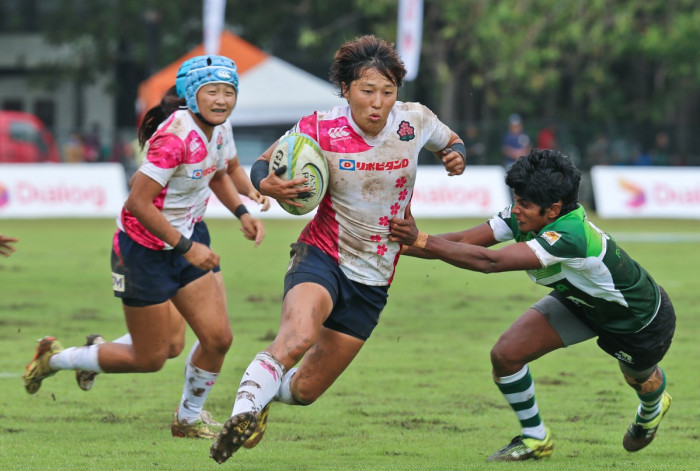 Japan have won the Asian Sevens Championship, after winning the second leg of the series in Sri Lanka in Colombo last weekend. As a result, both they and China, runners up both in Colombo and in the overall series, qualify for the Sevens World Cup in San Francisco next year.

Although details have not been formally confirmed, China - along with Hong Kong and Kazakhstan – should also have won places in the World Series qualifier next year.

The opening day in Colombo followed was remarkably similar to the first leg – which was perhaps no real surprise as, apart from China and Japan switching pools, the draw was the same. Japan, avoiding Kazakhstan this time, won Pool A with little difficulty. Hong Kong took the runners-up spot, though Sri Lanka – with home advantage – put in a far stronger performance, only losing to Hong Kong by a single try.

China topped Pool B, saving up the performance of the day for their 21-5 win over the strong Kazakhstan team, who had come close to winning their semi-final in Korea.

The second day opening with the quarter-finals, the first three of which went with form, though again Sri Lanka showed a significant improvement, losing just 12-0 to Kazakhstan. However, the surprise of the weekend came in the final game. An early score from Piyamat Chomphumee gave Thailand an early lead over Hong Kong, but Hong Kong still went into the break ahead thanks to a converted Colleen Tjosvold try. Hong Kong maintained that narrow two point lead until the last 20 seconds of the game, when Chomphumee added a second try for Thailed, this time converted, putting Thailand through to the semi-finals 12-7.

This put some pressure on Hong Kong, who now had to win the Plate to be sure that they could take part in the World Series qualifier, which they did – though Sri Lanka gave them a fright in the final. The home side scored first in the opening minute, but Ka Yang Chong tied the game up at halftime. The score remained tied until a long final play finally ended with Chong adding a second try to win the plate 10-5.

The two cup semi-finals proved to be close games. Japan had a comfortable 12-0 lead over Kazakhstan at halftime, but the Kazakhstanis fought back with two second half tries, both from Karina Proskurina – but missed both conversions, allowing Japan to reach the final.

China joined them, but only surviving a late comeback from Thailand who scored two late tries , going down just 15-12.

The final followed a similar pattern, Japan taking a 10-0 lead early in the second half when Honoka Tsutsumi added a second try to the one scored by Yume Okuroda in first half. A try from China’s Minglin Tang narrowed the score with five minutes left, but China could not add to the score – and Japan were champions again.

Guatemala have won a dramatic final at the Central American championship, winning the final against Costa Rica in sudden death extra time after the teams ended 14-14.