Kazakhstan have grabbed the last spot at the Women's Rugby World Cup with a comfortable victory over Japan at the Asian Qualifiers in Singapore. The victory means that the Kazakhs take the 12th and final spot at the World Cup being held in London in 2010. In the other playoff game Hong Kong defeated hosts Singapore. 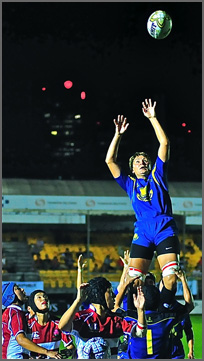 Kazakhstan beat Japan 43-5 to comfirm their status as the top team in Asia after they also comfortably beat Hong Kong earlier in the week 58-14.

The victory in the tournament by the Kazakhs, as predicted on this site last week, is no great surprise and the side will now join defending champions New Zealand, hosts and 2006 runners up England, bronze medallists France, Canada, USA, South Africa, Wales, Ireland, Scotland, Sweden and Australia at Women's Rugby World Cup from August 20 to September 5 next year.

Despite tough conditions featuring rain and high humidity, Kazakhstan showed their class from the outset, jumping to a 12-0 lead in the first five minutes. Stand-out centre Lyudmila Sherer added to her four tries from Wednesdays game against Hong Kong by scoring both of Kazakhstans opening tries and adding a third in the second half for an incredible seven try tally over two matches.

Undaunted, Japan never relented in either their effort or passion in front of a crowd of several Japanese supporters including former Prime Minister Yoshiro Mori who made the trip to Singapore to support Japans World Cup dream and hosting of the mens Rugby World Cup in 2019.

Japans strong organisation and discipline showed as they tightened their defensive lines and held Kazakhstan to a 12-nil lead until late in the half, when they conceded two more tries to flanker Alfiya Mustafina and captain Anastassiya Khamova. The conversion by fullback Aiverzym Daurembayeva brought the halftime score to Kazakhstan 24, Japan nil.

The second half started much like the first as Sherer added a third try, crossing over in just the fourth minute after the interval. In the 25th minute reserve Irina Chernenko crossed over for Kazakhstans sixth try of the match.

Despite the oppressive 38-0 scoreline, Japan defended strongly throughout the game and looked dangerous when breaking out in attack. Unfortunately for the brave Japanese, Kazakhstans defence was too strong smothering most scything forays before they could develop. Although unable to make any consistent marches upfield, Japans counterattacks always looked dangerous.

Their persistence and the crowds support paid off in the 30th minute when fullback Naoko Hasebe showed some great hands in taking advantage of a deflected pass to finish a nice move in the corner and put Japan on the board at 38-5.

Kazakhstan renewed the pressure and made a strong statement by crossing over again in the final ten minutes for their seventh try in the 35th minute. The try was again scored by Chernenko to send Kazakhstan to London in style.

Today matched anything I have seen in the worldwide qualification process. From the fan support to the standard of play and the organization of the tournament it has been a fantastic occasion.

What stood out for me was that the standard of play is excellent. Both matches featured some great ball handling, offloading, strength in defence and individual tackling.

Full credit to Japan, despite being down early, they came right back and played a very positive game of rugby. Kazakhstan played like champions and should be very competitive in London. They have strength in every area of the pitch. Their forwards are very capable and there is real speed in the backline. They now have until August to prepare and I expect them to do very well in at the Womens Rugby World Cup 2010.

In the other game of the day, Hong Kong finished as the third best team in Asia after beat Singapore 16-3 in an evenly paced and exciting match.

Hong Kong struck first through a first half penalty taken by fullback Man Po Kei. Singapore captain Wang Shao-Feng then leveled the scores through her own successful penalty attempt in the 27th minute. Three minutes later Hong Kong regained the lead through another Man Po Kei penalty followed by a try to speedster Aggie Poon to bring the score to 11-3 Hong Kong at halftime. The second half saw Hong Kong captain Royce Chan cross over in just the third minute to bring the score to the final 16-3.