Wales produced a blistering last quarter to come from behind to beat Ireland 27-19 in front of 6,113 - a new record for a Six Nations game in Ireland. 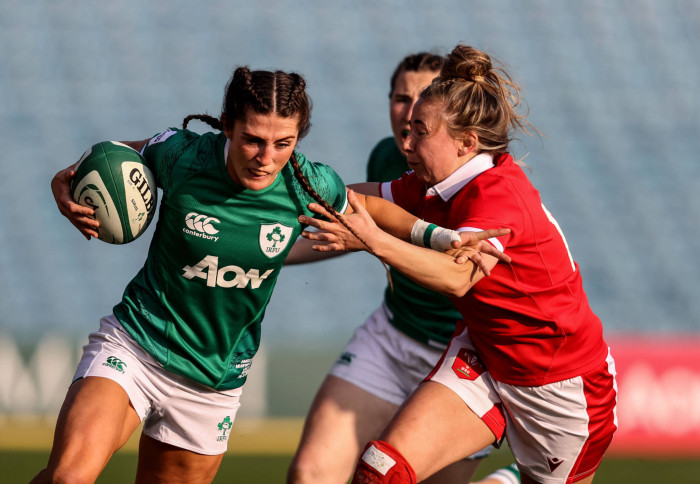 A bonus-point 27-19 win over Ireland in Dublin made for quite the turnaround from a year earlier,when Ireland had beaten the Welsh 45-0.

Ireland had named an inexperienced team but had vowed to play exciting rugby and they shaded the first half 14-0 thanks to a couple of excellent tries converted by Nicole Cronin.

A lovely pass from Stavey Flood put Amee Murphy Crowe over in the corner to open the scoring, as Ireland looked to play wide with Eve Higgins and Eimear Considine a constant threat.

Wales stayed well in touch though and responded when Carys Phillips drove over after her side won their own lineout and drove rolling maul towards the Irish line.

Ireland extended their lead shortly before the half hour mark as they kept the ball alive and Sam Monaghan gave a superb offload to Linda Djougang who raced over the try line under the sticks but Wales scored again through Jasmine Joyce, just after half time, who finished off very well out wide.

Kelsey Jones then crashed over for another Welsh score but this one was disallowed due to obstruction in the lineout in the build-up.

Ireland came straight back into it and capitalised from a mistake when Wales coughed up ball from a quickly-taken lineout and Djougang carried forcefully before Lucy Mulhall and Considine combined to send Flood over in the left corner.

The strong Welsh pack then started to dominate and another well worked lineout put Donna Rose over before she scored again just a few minutes later.

Replacement Robyn Wilkins converted to make it 22-19, and with Ireland unable to build for a response, Hannah Jones raced over to put the icing on the cake