With the women’s 15s rugby season at an end in most of Northern Hemisphere, all eyes are now on the Sevens World Cup in Moscow at the end of June – and the first big preparation tournament is this weekend, in London. 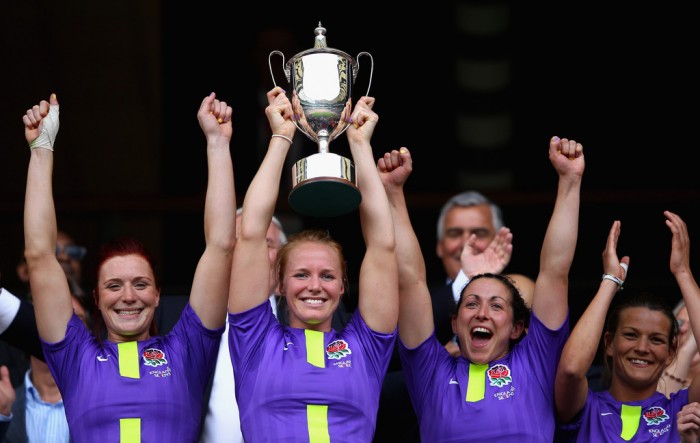 Although not an official IRB event this year, the London Invitational Women’s Sevens will be a major tournament. All of the eight teams taking part will be in Moscow – so there will be no easy matches, and every team stands a chance of winning.

Top seeds – and defending London 7s champions – are England, who are taking their home event very seriously."I’m pretty confident that everyone in our squad is looking forward to this event,” said  captain Michaela Staniford. “The build-up has been fantastic and from a playing point of view, we want the opportunity to play at Twickenham again."

England are in great form, having lost only one Sevens in 2013 (the final in China), and will start as favourites.

However, they first have to qualify from a group that includes the current World Champions (Australia), Europe’s Number 2 (Spain), and France – who England will open against.

France have experimental team (as we reported earlier this week), with eyes on Moscow, but there is plenty for opposition to be wary of here – including players such as Jade le Pesq and Caroline Ladagnous, who were part of the French Six Nations team that beat England at Twickenham this year. However, France also have the handicap of being the only European nation that is still playing fifteens – all of its players were playing in the Top 10 last weekend, and many have at least another month of 15-a-side rugby ahead. Switching formats at six days’ notice is a challenge which the French struggled to cope with last season when a similar team underperformed at both London and Amsterdam.

Next up for England will be Spain – probably the leading sevens nation that is not one of this year’s IRB core teams. On a huge high having qualified for next year’s fifteens world cup only two weeks ago, they also face France’s problem of having to refocus now on the shorter game. In addition the only European team that Spain have never beaten is England. Qualifying from the pool is possible for the Spanish, but their key game will be their first one against Australia.

England face Australia in their final pool match. They have had a disappointing year so far – repeatedly making semi-finals in IRB tournaments without making a final. It is a series of frustrating finishes which began in London last year – so this will be an ideal place for them to lay that particular bogey. They also have a better record against England than most, and if anyone is likely to upset the home team it will be Australia.

Pool B is also full of interest. USA are the top seeds here, having had a mixed year with the highlight being reaching the final in Houston and finished fourth in China, where they lost to England. London therefore gives them a chance to gain some revenge.

However, they must first get past Russia – one of the toughest and most feared teams outside the IRB core. Fifth in the IRB events in both Houston and Dubai (where they drew with New Zealand), they are more than capable of upsetting anyone.

Another team capable of surprises is the USA’s next opponent, Ireland. They beat the Netherlands to win the plate in Guangzhou, despite having just come out of an exhausting – and triumphant – Six Nations campaign. With more time to prepare they will be another team to watch.

The USA’s final pool game will be against great rivals Canada. The Canadians seemed unbeatable a couple of years ago, but had failed to recapture that early form until the China Sevens where the swept past Australia and the USA on their way to third place – only England stood in their way. If they can find that form again they could go all the way to the final this weekend.

Match timetable
(The pool matches and quarter-finals will take place on Twickenham’s Cardinal Vaughan pitches and the semi-finals and finals will be played in Twickenham Stadium.)