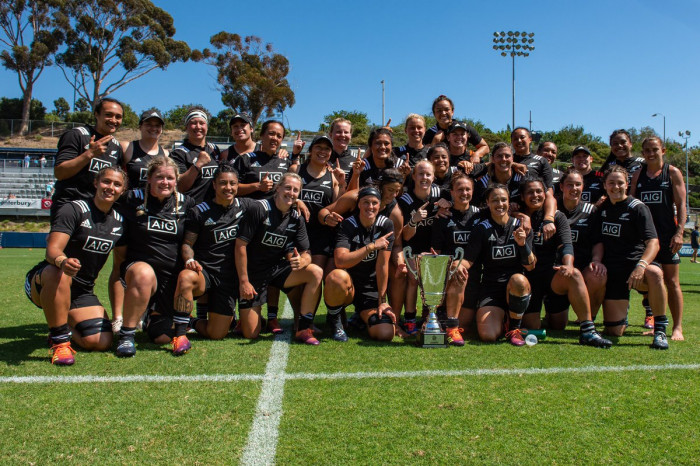 New Zealand too strong for England

A hatrick for Renee Wickliffe did the damage for New Zealand, with her tries the highlight of what was a stop start affair, with neither side at their best.

England got off to a strong start, with Sarah Bern and Zoe Harrison prominent and Emily Scarratt stepping up to knock over an early penalty. New Zealand were also almost immediately down to 14 players when Toka Natua was binned for stopping Leanne Riley from taking a fast penalty as pressure built.

Kendra Cocksedge got three points back from the tee before England took advantage of the extra player with Scarratt finishing  a try well after Bern and co did the hole punching up front.

But as has been the case a times in this tournament, England let errors creep into their game and played too loosely awith the ball back in their own half.

Cocksedge found it far too easy to pick her way through four defenders inside the 22 and that led to a first tor Wickliffe, and the winger was over again a few minutes later after the easiest of intercepts from a stray Bern pass, as England looked to play wide from danger areas.

With Pia Tapsell and Les Elder defending tigerishly and pinning England back, Simon Middleton's team needed half time to come to regroup and Scarratt's boot relieved the pressure.

New Zealand stepped up the intensity in the second half and found good change in attack through the middle as Chelsea Alley made a number of good breaks and they started to get on top at the breakdown - an area that was refereed very loosely.

Scarratt brought England to within a couple of points to 13-15 when landing a penalty in the 46th minute and while New Zealand lost hooker Te Kura Ngata-Aerrengemate to the sinbin for a ruck offence, two minutes later, they were able to prevent England scoring while she was off.

Cocksedge edged the Black Ferns back to a five-point advantage with a 59th penalty, but it was from a scrum in the 64th minute that they secured their winning advantage.

Replacement back Theresa Fitzpatrick raced outside, Rua Demant to take a perfectly-timed pass to break through, and produce an outstandng offload to Wickliffe to race over the line and score.

For New Zealand the win will have brought some redemption after the poor display against France and even playing with 14 players for 20 minutes, their game management and tactics held up well.

England will be disappointed with areas of their game but did use the tournament to build depth and will have plenty to ponder.

Two years out from a World Cup and the game's top two seeds have lots of work to do.

Simple mistakes and errors in ball handling allowed France to make use of their skillful kicking game and dominate possession through the second half of this one sided game.

While the Eagles managed to put two tries on the board at the tail end of the game, the gap on the scoreboard was too much to chase.

“I think we showed at times we could really put the ball into better space and challenge France, especially in that first 20 minutes,” said  USA Head Coach Rob Cain. “But, we’re frustrated. We didn’t play the type of rugby that we wanted to and our core skills really weren’t where they could have been. But like I explained to the players, we need to put it in context. We’ve made great strides over this tournament and it’s just a shame that we’re going to be leaving a little frustrated after our performance today.”

France opened the scoring through two Jessy Tremouliere penalties before Madoussou Fall crashed over for the first score. USA held their own as the half wore on though the French kicking game had them under huge pressure at the back.

It took to the 13th minute for France to score again with an attempted box kick by Ashlee Byrge, looking to relieve defensive pressure at the breakdown, was charged down and Emiline Gros scoerd to make it 20-0 at halftime with Tremouliere converting.

The second half was one sided - Celine Ferer kicked it off with a score from a chip and chase before Laure Sansus crashed over from a 5 metre scrum. Cyrielle Banet got in on the act and with Tremouliere on form from the tee, France were into a 41-0 lead which almost hit 50 when Marine Menager scored out wide.

The USA finally showed some life in attack when Stacey Bridges made an exciting run through the middle and then finally Alev Kelter went over out wide. Sansus got another to push France out to 53 before Charli Jacoby forced her way over the tryline for the second USA score.