The Spanish close out 2019 with 100% record after a powerful French Occitan XV came from behind to win a tough battle 16-12. 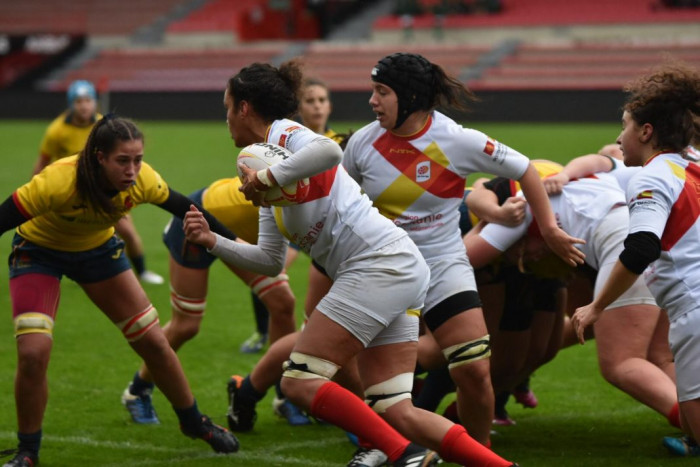 The French warned from its first scrum that it was willing to stand up to the Leonas and it was its forwards that, with their size and power left the Spanish without a win.

The opening first minutes saw both teams to try to take measure of the other, in what was the Occitan's debut as a regional team. After these first minutes of uncertainty Spain managed to get into the French 22 with a great kick from Maria Ahís.

The Occitan scrum was the weapon that put Spain’s in trouble and one of main tool to score, as the centre Audrie Abadie showed in the first minutes, adding the first three point from a penalty on the Spanish 22.

Despite this setback, the Spanish reaction was swift and María García who was responsible for scoring the first try of the game to put Spain 3-5 ahead.

The ball returned to the hands of the home team, who continued to focus on their strengths, the scrum and the short kicks ahead from which they managed to advance many meters. In this way in the 28th minute they managed to score their first and only try after a 'pick and go' by Mathilde Cueye that put them ahead 10-5, after Abadie’s conversion.

In the last minutes of the first half, the Lionesses had the opportunity to tie the game, but handling errors accentuated by the Touloussian rain and the French defence ensured that the ended the half without adding to the score.

The second half could not have started better for the Leonas. Hungry for points after the coach's talk after just after four minutes came the second try, from Isabel Macías.

Despite the try, Spain lead by just 12-10, with the two sides very even. The give and take did not stop, with neither squad that able to reach find anyway way through the strong defences of both teams. But just four minutes from the end, Occitan forced the penalty and Audrie Abadie sent the ball between sticks that put her team ahead again by the just 13-12.

Scenting victory, the French took control with some of their best phases in the match, beating the Spanish and were able to one final penalty to sign off their first victory as a regional team in front of a crowd that vibrated in the stands of Stade Ernest Wallon.