From “Emerging Nation” to European Champions in less than a decade, Poland completed a remarkable journey in Krakow this weekend despite losing to Ireland in the final. 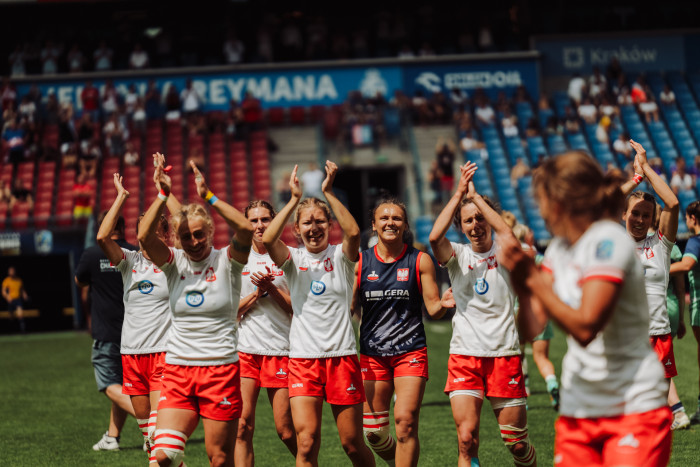 A tournament win in Lisbon followed by runners-up at home in Krakow was goo enough for Poland to become only the sixth nation to win the European 7s Championship since it began in 2003.

In the third tier of European 7s until 2011, and still playing taking part in “Emerging Nations Camps” until 2013, Poland were unbeaten against all-comers apart from their final conquers in Krakow, Ireland.

Ireland had finished fourth in the first leg, and so were drawn in the same pool as Poland, and caused a pause in Poland’s party by beating the home team 21-0 near the end of the first day.

However, unlike in Lisbon, the addition of an extra day allowed this tournament to feature semi-finals with both Ireland and Poland qualifying for the last four.

Pool B was dominated by Scotland and Spain. The former were narrowly beaten in the final in Lisbon, while the latter had had a disappointing tournament, finishing sixth despite selecting their best available team.

Helped by France shuffling their squad and bringing in a number of development players, Spain gained a morale boosting win against their oldest rivals in their opening game while Scotland swept aside Wales. Both teams came into the final pool game unbeaten with semi-final spots already assured at the end of the second day, and it was Scotland who came out top winning 17-14.

That resulted in a semi-final between Lisbon finalists Scotland and Poland. With Lisbon bronze medallists France out of the running, it was a knock-out game that would also produce the series winner, and to the delight of crowd and players, that winner proved to be Poland, beating Scotland in a terrific contest by a larger margin than in Lisbon, 14-0. Ireland brought Spain’s improved run to an end with a 26-0 win in the other semi.

With the series title already assured the final could have been an anti-climax, but it was as good as the final in Lisbon, with the lead again changing hands and Ireland coming from being behind at half-time to win the title by 21-17.

But it was still Poland’s day - an amazing story that shows what any nation, given determination and investment, can acheve.