Saracens stay ahead in the English Women's Premiership table with wins too for Wasps, Bristol and Richmond last weekend. 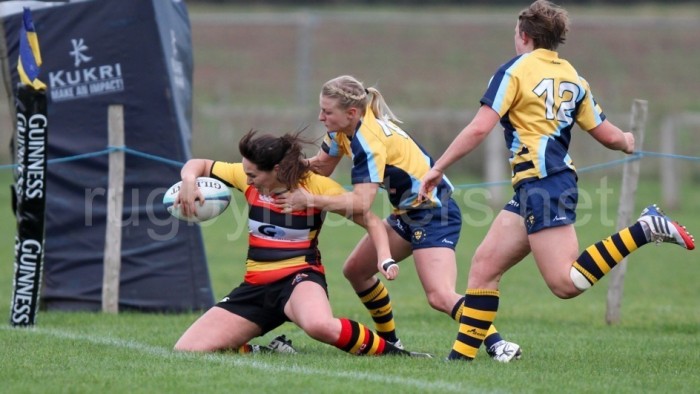 Image thanks to Rugby Matters

Previous meetings of these teams have seen close and tough encounters and this game followed the same trend until the final 15 minutes.

While Richmond had the majority of possession, Worcester defended well, but not for the first time this season, they were left frustrated with some late injuries.

The crowd were treated to a master-class performance from former Worcester fly-half, Alice Richardson, who combined vision and spacial awareness with excellent passing. The home defence struggled to defend this and Richardson was aided and abetted by another former Worcester player, Jo Watmore, who was a constant thorn in Worcester’s side.

Richmond took the lead after just five minutes, when clever handling from Richardson released Becky Ball to score in the corner. Worcester composed themselves and competed well in the mid-field - their efforts being rewarded in the 30th minute with a penalty, superbly struck by Megan Goddard, to reduce the deficit.

However, Richmond extended their lead just six minutes later with a try from Watmore, converted by Richardson and continued to apply pressure with a second try from Ball on 38 minutes. Not daunted by this, the home side fought back with a try from Ceri Large just before half time which at 8-17 left everything to play for.

The opening 20 minutes of the second half saw Worcester very much in command and they were duly rewarded with a try from replacement Laura Keates. At this stage it looked like they may snatch a victory, however, the visitors pushed on in the final 15 minutes.

A brace of tries from Fran Matthews, both converted by Richardson, sent the visitors on their homeward journey with a winning bonus point, leaving home side to reflect on opportunities missed and areas for development.

Aylesford Bulls entered week four in optimistic mood and game started well with the Bulls putting pressure on the opposition and pinning them in the corner.

But after 12 minutes Wasps broke away for their first score through Tess Gardner and it well converted by Hannah Edwards to make the score 7-0. Then four minutes later the Bulls let another one slip through making the score 14-0, this time with Rebecca Rowe cutting through to touch down.

Aylesford continued to exert pressure on the Wasps defence and gained a penalty in front of the sticks which unfortunately drifted the wrong side of the posts.

Continuing their positive play, the Bulls just seemed to lack that killer instinct. Great breaks from centre Sarah Riordan went unrewarded with the support runners just a step to far away.

On 25 minutes Wasps again caught the Bulls on the hop doing well to escape a shoved scrum with the ball, running blind and exploiting the overlap helped Rowe score for the second time . The conversion out wide was missed and the score remained 19-0 for the rest of the half.

Just before half time, with the Bulls attacking Wasps on their 5 metre line, an injury to scrum half Florence Williams forced changes to the Bulls line up.

It was a stalemate in the second half until, with Riordan sinbinned and Wasps finally broke through. The conversion was missed but a penalty four minutes later was secured, and a further try from Clare Purdy made the score 31-0.

The Bulls were not giving up and after some free-flowing offloads a scrum 10 metres out was awarded. The Bulls dominance in that area was never more apparent and they drove the Wasps pack backwards until, with still work to do, skipper Catherine Spencer picked the ball and crashed over the line.

Wasps added one more to their tally through Gemma Rowland before the final moments with the Bulls again on the attack.

Bristol secured their first victory of the season with an emphatic away win over Darlington Mowden Park Sharks.

The first half started with a try and conversion from Abbie Brown quickly followed on the ten minute mark by Katie Mason who grounded the ball expertly to bring the score to 14 – 0 to the home side.

Bristol kept the pressure on throughout the half with each member of the team contributing with great footwork and safe hands. Set pieces worked well and there was fluidity between the forwards and backs which amounted to a storming last 10 minutes of the half. Deborah Fleming, Abbie Brown and Claire Molloy notched up 15 more points, with Brown converting two out of three tries, bringing the half time score to 33 – 0.

The second half saw Becky Hughes yellow carded for tapping down the ball, however Danielle Waterman kept the momentum going for Bristol with a try on 49 minutes, converted by Brown. Katie Mason got her second on 58 minutes, again converted by Brown taking the score to 40 – 0.

The last 20 minutes saw Darlington stage a fight back with converted tries on 63 minutes (Scholes) and 78 minutes (McLean), but with a yellow card for Bristol player Baylee Annis and  McLean the game ended on 47 – 12, with Bristol coming away with the bonus point win.

Forward of the match Rachel Taylor said. “We knew they were going to come at us right from the start and they were very physical from the off. It was important that we threw down our marker in the first 10 minutes and came out strong which we did. I’m so pleased that we came out and performed, it’s what we’ve been building towards and everyone played their part.”

No report made available