We offer an in-depth preview of the final leg of the Women's Sevens World Series in Amsterdam this weekend and New Zealand sit in pole position to lift the first ever title. 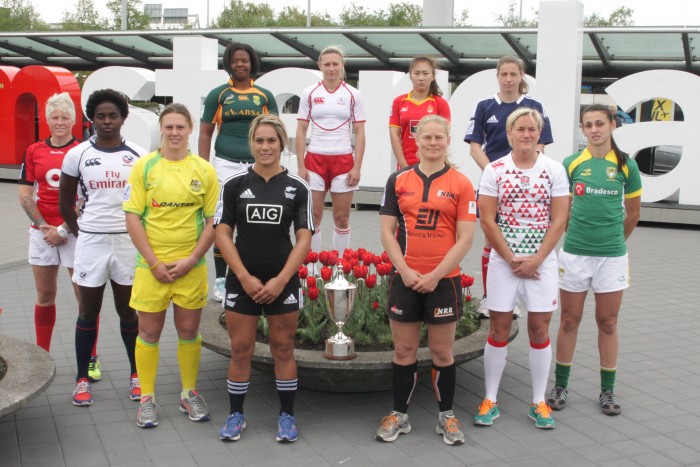 New Zealand
Favourites to lift the first Women’s Sevens World Series title, New Zealand know they will be crowned champions if they reach the semi-finals this weekend–  a feat that means nobody can overtake them at the top of the standings, where they sit on 54 points.  It has been a good first year on the circuit for Sean Horan's side and the coach has named two new faces in this squad and recalled Renee Wickliffe. They should certainly finish top of their pool, though they will be tested by Netherlands and Russia, and it would be a massive shock if they did not at least reach the final. With England leaving some of their leading players behind this weekend, the competition is certainly theirs for the taking.

Netherlands
The host nation will be desperate for a good showing on home soil after an up and down season on the circuit.  Successive Plate Final losses (to Ireland in China and to Russia in Houston) will have been disappointing for the fulltime professional Dutch side, and a top four finish this time around, or indeed a Plate win would be a big boost heading into the World Cup.  Hosting a leg of the series is a big milestone for Netherlands women’s rugby, a country with a rich history in the game (they played in the first ever women’s test match in 1982) and this current crop of stars will want to do their hosting duties justice.

Russia
Russia will have benefited significantly from their London experience and will be looking for at least a quarter-final place in Amsterdam. There were times when their inexperience showed in London – most particularly in their quarter-final with Australia when a perception that some decisions had gone against them resulted heads dropping and large defeat. It was a game that showed that the Russian rely on their coach more than perhaps any other team – if “Pasha” is happy the team play well, if not then they can struggle. The undoubted star of the team is Baizat Khamadova (her sister is currently unavailable) – if she is on the field anything is possible.

China
Having lost the Bowl final and at the same time finishing in the bottom three of their own leg of the series last month, not much is expected this weekend of this developing Chinese outfit.  China have shown on occasion that they can mix it with the best – running the USA close recently – but up against the more experienced sides they have struggled and they have been placed in an incredibly tough pool in Amsterdam.  China are playing the long game and developing a young squad of players who have lightening pace. A team for the future.

England
At full strength England would have been New Zealand’s key rivals this weekend, but having left a number of their more experienced players behind (Heather Fisher, Joanne Watmore and Michaela Staniford to name a few) England will do very well indeed to prevent the Kiwis taking both the Series and the tournament title.  England will however be full of confidence after a win in London last weekend and their strength in depth is such that the players coming in this weekend are well capable of winning every game, and crucially they will be desperate to make a mark to try and make the plane to Moscow.  The clash with Canada will probably be the highlight of the pool stages.

Canada
Canada showed pretty well in London and fought back from an early deficit to get within a winning score of England in the semi-finals, who clung on to win 17-12. With a little more consistency, Canada are more than capable of topping this pool and battling their way to a final this weekend. Jen Kish and Mandy Marchak remain key players for Canada, but John Tait has extended the depth and talent in his squad and they are becoming a very difficult side to beat.  Canada, fifth in the table on points, would love to finish the series in the top four, with a chance to also knock near rivals USA from their fourth spot.

South Africa
South Africa surprised many in the opening tournament of the series by making it all the way to the Dubai final, but had a less productive outing in Houston in their other appearance in the series finishing eighth overall.  Since then South Africa have had useful preparation for this leg and the World Cup by winning the CAR 7s, defeating Senegal, Kenya and Uganda. Captained by the impressive Mandisa William, South Africa have some superb 7s players in their squad including Phumeza Gadu and Zenay Jordaan and if they can revisit the form of Dubai, they might just spring a shock here.

France
The French team had a very disappointing London Sevens, but the team in Amsterdam is an (almost) completely different squad. However – as with last weekend’s team - they again suffer from having to come straight out of playing in the domestic Top 10 fifteens tournament only five days before. As a result the major weakness of the team in London - the fact that they had little recent experience of either playing sevens or playing together as a team – could well be repeated. However they will be competing with the London team for places in the squad for Moscow, and if they can show just a small amount of extra initiative going forward they could be booking their tickets for the end of June. France’s key game will be against South Africa – a win would give them an outside chance of making the last eight, but a more realistic target would be a place in the Bowl final.

Australia
Australia are unchanged from the London Sevens, and therefore will again include several young players from their successful Youth Olympics team. Demonstrating the remarkable depth of talent Australia has to offer, the slightly experimental and developmental team did very well in London and could do just as well in Amsterdam. In London they noticeably improved and learnt game-on-game after a difficult start that saw them lose to Spain – who they will meet again in their pool here. They will also meet the USA – who they beat in the London semi-final – and Brazil, so can be confident of a quarter-final place at least.

United States
Also unchanged from London, the USA will be hoping to do at least as well as they did there. It may be tough, however, as they lost heavily to Australia in the London semi-final and only narrowly beat Spain in a game that could have gone either way. However the USA is another team that is clearly looking beyond the Sevens Series to Moscow, or even beyond, so their main target this weekend may be experience. As with Australia, they should make the quarter-finals.

Spain
Spain had a wonderful first day in London and were very unlucky not to make the semi-finals after Australia’s surprise and last-minute win over England pushed them into third place in the pool, and a tougher quarter-final draw. Although with an eye on Moscow, the Spanish will be looking to perform at least as well as they did in Dubai with the hope of making a case for Core Status next season. A small but very talented squad with a reputation for determination and team spirit they should make the final eight, and are quite capable of winning the pool.

Brazil
Brazil will be hoping to build on their performance in the teeming rain of Guangzhou, but have a very tough pool – moreover against teams who were all playing last weekend in London, whereas Brazil have had no competitive game since the last round of the Series. A win of over one of their pool rivals would be a significant surprise, and it is difficult to see them playing for anything other than the Bowl.