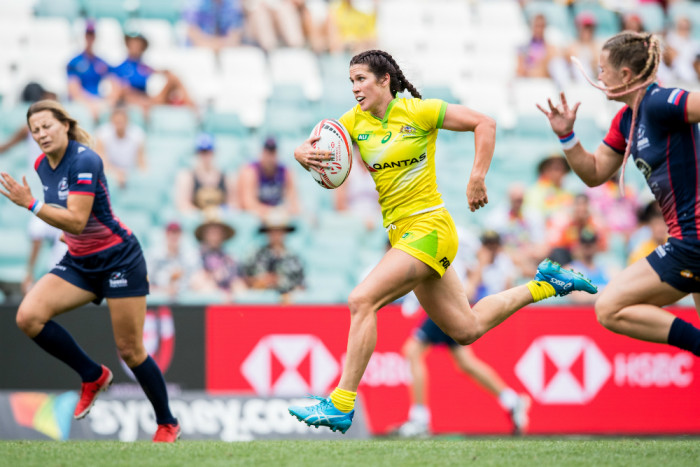 It should be a high quality event with five World Series teams involved, including the top three, plus three more teams who were competing in last week’s World Series qualifier.

We take a look at the pools and squads.

Failing to reach the quarter finals of the last round of the World Series, and lying in 8th position overall, can hardly be the ideal form going into a huge competition for England, but coach James Bailey has a strong squad available and on their day, this team can beat anyone.

Despite her inexperience in an England shirt, Jess Breach is one of the players to watch of the entire event - she scored nine tries in her Sydney Sevens tournament debut earlier this year and seems destined to become a star of the sevens game.

Wales have been hit by some disappointing road bumps in the buildup to this event. There was the heartbreak of being knocked out of the World Series Qualifier last week at the Quarter-Final stage - a tournament they had high hopes of winning - while since arriving in Australia, news that captain Philippa Tuttiett and Alisa Butchers had been forced to withdraw due to injury was a hammer blow.

Even with those two, this would not have been an easy competition for Wales to score some strong results, given the quality of the opposition and with Australia, England and Fiji all years ahead of them on experience, this competition is about this young Welsh side building their understanding of the standards needed at this level and developing their players to try and qualify again next year for the World Series.

Elsewhere  there are four other players who were involved in the Six Nations who will bring valuable big competition knowledge with them with Sioned Harries, Elionor Snowsill and Jaz Joyce all likely to be key to help Wales navigate what looks a tough few days of rugby.

The clear favourites are playing on home soil, and it will take a significant effort -most likely from New Zealand - to stop this team recording a remarkable treble of becoming the first women's team to win the first gold medals at the Rugby World Cup Sevens, the Olympics and now the Commonwealth Games.
Fresh from their success in Sydney, as well as having home advantage, quite simply Australia are the form team by some distance. There is probably some extra motivation in the fact that this is their coach Tim Walsh's final tournament before he takes over the men's side, but this team hardly needs any extra boosting.
The squad is packed with game-changing names, and players who are helping to drive huge profile and interest in women's rugby in Australia, with 23-year-old Charlotte Caslick one of the faces of the tournament, and the brilliant Emma Tonegato in flying current form. Captained by Sharni Williams and Shannon Parry, expect Australia to get through their pool unscathed and set up a superb finale in front of their home fans.

"She's phenomenal, on and off the field. Not only to our team but to the game of rugby. There's been a huge pioneering aspect in the way she has rebranded and almost created a new genre for women's contact sport.

"The skill that she has and the way she makes decision is unbelievable and as a coach and to see and train with her every day, she trains like she's second.

"Every session she goes beyond expectations and that's why she is good as she is."

Following an impressive season last year, Fiji haven't quite managed to kick on and have had a much tougher World Series so far this season. However this remains a talented aand unpredictable squad can do anything, they have the capacity to spring surprises and produce big performances, so nobody will take them lightly.

With six Olympians in this squad -  including captain Ana Maria Roqica, Rusila Nagasau, Tima Ravisa and Lavenia Tinai – this is about as strong a team as Fiji could select and any rediscovery of form will  make them a genuine threat in this pool and a semi-final spot cannot be ruled out.

Coach Iliesa Tanivula has initially kept his team together away from the Gold Coast in Brisbane where they trained for a week before travelling to the Games village. Luisa Basei said they enjoyed the Games environment. “We are all excited and look forward to the Games as it would be challenging, It’s our first Commonwealth Games and we are excited to be here.”

Coach John Tait has selected his best available squad for the tournament, including captain Ghislaine Landry and Julia Greenshields who have been in great World Series form so far this season, each scoring over 60 points after the two legs played to date. Greenshields currently finds herself in third place for most tries scored on the series with 12, while Landry remains the all-time points scoring leader on the world series with 906 points, 86 more than the next highest Portia Woodman of New Zealand, who the Canadians will meet in their third pool game.

“It’s an honour to be named to the first-ever Commonwealth Games roster for Canada. Having seen success as part of Team Canada in both Rio de Janeiro and Toronto, we’re incredibly excited to take part on the Gold Coast in what will be a historic tournament for Women’s Rugby,” said Landry.

Canada are ranked third on the World Series, with 3rd and 4th place finishes in Sydney and Dubai respectively.

“We are excited for another opportunity to compete at a multi-sport games, even more so with these games as it will be a first time ever and feature the current top three teams in the world,” said John Tait from Langford. “Selection, for the first time this season has been extremely tough, with the return of some of our most experienced players along with a few of the younger ones putting they hands up with some really good consistent play of late.“

Tait’s squad includes the return of fast paced runners Bianca Farella and Charity Williams for the first time this season after injury, but Jen Kish misses out due to a re-occurring injury.

“Obviously, not having a player of Jen’s caliber and experience is a hit to us, she played great in Sydney winning some crucial turnovers at critical times for us and creating so much space for others on attack. She has been playing with some lingering injuries from the past couple of seasons but showed her character and toughness to play through them for the team,” said Tait. “Fortunately, the return of Charity and Bianca along with Sara Kaljuvee hitting some top form, gives us some good options within the squad to challenge for and bring home a gold medal. “

Canada should qualify for the semi-finals from this pool as they would seem to have much too much experience and power for South Africa and Kenya.

South Africa arrive in the Gold Coast from Hong Kong where the lost in the final of the World Series qualifier for the second year running.

As with the Olympics, South Africa’s qualification was never in doubt on the field, but required the approval of SASCOC – their National Olympic Committee, which also deals with Commonwealth Games entries. Fortunately, this time SASCOC did approve their entry.

SASCOC’s refusal to allow South Africa to take part in the 2016 Olympics was because their considered qualification through their continental championship was too easy, but if we learnt anything from the qualifier in Hong Kong last week it was that this does not apply anymore. Kenya beat South Africa in the pools to become the first African side to ever beat a South African team in any form of rugby – and then nearly did it again in the semi-finals the following day.

The Women ‘boks are capable, on their day, of real surprises, famously getting to the quarter-finals in Dubai in 2016, but getting out of a pool with New Zealand and Canada would require some of the best results they have ever achieved – and the with Kenya in the pool the real battle may be to make the 5th place game.

Rubi Tui going down with mumps last week disrupted New Zealand’s plans for the Commonwealth Games, requiring the entire team to be quarantined, missing out on the opening ceremony. The squad was finally been allowed to travel south towards Surfers Paradise after 10 days on the Sunshine Coast, which included an "interesting" day in isolation after Tui was diagnosed, according to Stacey Waaka.

"It was isolation, literally inside for a whole day and a half. We weren't allowed any contact with anyone else, so that was weird, but we did have a lot of entertainment indoors. Video games, cards and movies, so it was great. It was relaxing, that was our day off, so it was OK."

Although they have moved down to the epicentre of the Games, they're in a set of apartments, rather than the athletes' village, as a further health precaution.

Coach Allan Bunting said Tui’s absence would be a big loss not only on the field, but off it too.

"She's a big loss, she's a big part of the heart and the culture of our team, but for us, it's made us stronger," he said.

Tui has been replaced by 19-year-old Alena Saili with 17-year-old Risi Pouri-Lane confirmed as the travelling reserve. Pouri-Lane would make her international debut if she was called into the side.

Although not the ideal preparation, New Zealand will qualify from this pool comfortably.

Kenya’s performance in Hong Kong showed that they have closed the gap on South Africa – except in one area. Fitness. Their defeat to South Africa in the Hong Kong semi-finals, having been ahead, was reminiscent of their performances in the World Series where promising performances early in matches were often let down in the final minutes.

Although their performance in Hong Kong will have boosted confidence, the loss of Janet Awino – one of their leading players - was a blow.

“Overall, the performance by the team was superb, though we didn’t win it, we went a step further from last year and picked plenty of positives and experience which will be vital for us as we head into the Commonwealth Games,” said coach Kevin Wambua.

As with South Africa, progress to the semi-finals seems unlikely – so the key game will be their match against the ‘boks on Saturday.