Quarter-finals looking clearer after Round 2

After Sunday’s three games, the teams likely to make the final eight are looking clearer 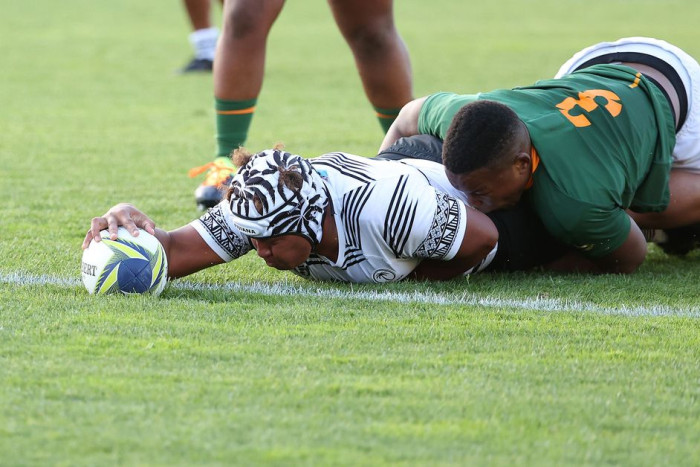 State of play after two rounds

New Zealand and Canada lead the way with two bonus point wins, with the Black Ferns holding a 22 point advantage at the top of the leader board.

England are in third place with two wins, and the best points difference, but failing to record a bonus point against France means it is unlikely they will finish better than third seeds.

France are clearly ahead in fourth place with six tournament points and a +29 points difference. Italy are a point behind in fifth  and +2 points difference that gives a big advantage over Australia in sixth with a -22 difference.

The race for the two third place spots is lead by the United States, whose bonus win against Japan puts them in pole position for the 7th seeding, and also a positive +1 points difference.

Wales and Fiji are both on four tournament points but the Welsh have a 20 point difference advantage, -41 to Fiji’s -61.  Fijian handling errors in front of the try line meant they missed a bonus against South Africa, which could be very costly.

If unchanged this would give us the following quarter-finals:

Room for change in Round 3?

Realistically the only major change to the above could come when Australia meet Wales in a fascinating encounter that will open round three with the winner likely to end as sixth seeds, and the loser eighth.

Elsewhere, the top five seeds, and seventh seed, are unlikely to change

After their performance against Wales, it seems unlikely that the Black Ferns can be caught and the home team will end the pool stage as number 1 seeds.

Canada have to beat the United States to retain their second spot – if they fail to do so England, who will surely get a bonus point win against South Africa, will move into second place. However, Canada have won the last five tests against the Eagles, and relative form so far suggests just one result, which would leave USA as seventh seeds.

Fiji could sneak in if they stay within seven points of France. But for all of their heroics in round two this seems unlikely

New Zealand secured a bonus point and a place in the quarter-finals with a 10-try 56-12 win against Wales.

Wales held the Ferns to 0-0 until the 17th minute before the home team took charge, scoring four tries in 11 miutes.

Second-row Chelsea Bremner got their first try and then, three minutes later, star winger Portia Woodman made use of some good handling inside her to go over out wide. Another sweeping move was finished off by teenage centre Sylvia Brunt in the 25th minute for a third , and try number four bonus point try came just before the half hour mark through Woodman.

Wales could have folded at this stage, but they got their set piece working and, from a strong lineout drive just before half-time, scrum-half Ffion Lewis dived over for a try from short range. Stand-off Elinor Snowsill converted and it was 22-7 at halftime.

New Zealand because they came out firing at the start of the second period. Firstly, second-row Maia Roos found a way over for try number five, converted by Demant, and then centre Theresa Fitzpatrick added another five points.

It was one way traffic once again and, in the 49th minute, Brunt got her second try of the game. It was not converted, but at 39-7 New Zealand were well in control. Try number eight came before the hour mark when replacement front-row Krystal Murray used her power to get over the line. Demant converted and the home side were 46-7 to the good.

Wales thought they had scored their second try soon after when their forwards edged over the line, but Woodman somehow ripped the ball away and New Zealand stood firm. With 12 minutes to go New Zealand replacement Sarah Hirini was yellow carded, but with 14 players they bagged try number nine through Demant. Number eight Charmaine McMenamin joined Hirini in the sin bin with five minutes to go and Sioned Harries, McMenamin's opposite number, took advantage against 13 to score an unconverted try.

When New Zealand were back up to 14 with the clock heading into the red full-back Ruby Tui was set up by Woodman for try number 10. It was unconverted, but it did not matter.

The two winners from the opening round in Pool B met in the second game of the day.

The game lit up within the first minute, a clearance kick by Canada scrum-half Brianna Miller bouncing around on the halfway line before Italian full-back Vittoria Ostuni Minuzzi got her hands on the ball and showed great feet to get through the defence and score an excellent try. Centre Michela Sillari missed the conversion.

That shocked Canada into action, but it took them until the 20th minute to get on the scoresheet. When it came it was a really good finish by winger Paige Farries and when Miller converted they were 7-5 up.

Hooker Emily Tuttosi, who scored a hat-trick of tries against Japan, was at it again with four minutes to go before half-time. Miller missed the conversion and Canada were 12-5 to the good with 40 minutes to go.

The tries by Farries and Tuttosi - plus some strong defence - seemed to have given Canada confidence and they stretched their lead even further in the 50th minute. Centre Sara Kaljuvee was the scorer this time and although it was unconverted they were up 17-5. And that lead was further extended to 22-5 thanks to the bonus point fourth try by Tuttosi.

The five pointer was her fifth of the competition so far and when she was replaced by Gillian Boag in the 67th minute she could take a rest feeling more than happy about her contribution to this performance. Around that same time her team mate Emma Taylor, a replacement, was yellow carded for a late challenge as she tried to block a clearance kick.

Italy could not score when Canada were down to 14 players, but they never gave up and they did get a second try through Elisa Giordano at the death. Sillari converted to make it 22-12, but it was Canada's day.

After the match, the Canada captain Sophie de Goede said: “This is a tough Pool B that we are in, so we knew we had to play well against Italy. “Our experienced forwards help set up this victory and we are pleased with how things are progressing, but there are still improvements to make before we play USA next.”

The final game of the round was a classic game and a challenge for the game of the tournament so far. Fiji dominated for long periods was only settled in the dying seconds as Karalaini Naisewa scored under the posts.

Their first-ever Rugby World Cup win had looked in jeopardy when Libbie Janse van Rensburg put South Africa in front for the first time in the match in the 79th minute. But Fiji kept their nerve from the restart and another bullocking carry from irrepressible Mastercard Player of the Match Siteri Rasolea gave them the platform to get over the line and deny Zenay Jordaan a famous win on the occasion of her record-breaking 35th cap.

Had they lost it would have been a huge disappointment for Fiji who wowed the fans with another thrill-a-minute performance, but two disallowed tries and a determined South African defence meant they could never put clear water between themselves and the Springbok Women.

The first of those tries to be chalked off came as early as the fifth minute when openside Raijieli Daveua was denied by a forward pass in the build-up after a strong run down the centre of the pitch and offload from Sesenieli Donu set her on her way.

With forwards and backs running hard and giving the ball some air at every opportunity – Fiji’s offload count was into double figures inside 15 minutes – it felt only a matter though before the Pacific Islanders would get their first points, especially when South Africa were reduced to 14 players.

Staying true to their attacking spirit, Fiji continued to eat up the metres, taking quick tap penalties at every opportunity but a lack of execution and composure in the 22 prevented them from inflicting more damage on the scoreboard.

Incredibly, South Africa found themselves level when, in a rare attacking passage of play, Zintle Mpupha picked up a loose ball 25 metres out and scythed through a gaping hole in the Fijiana defence to score under the posts, Libbie Janse van Rensburg converting.

Fiji, however, went into the break with a deserved lead when Akanisi Sokoiwasa dotted down on the stroke of half-time after a couple more defence-denting runs from Rasolea. Cavuru added the extras.

Stiff resistance from the Springbok Women and another disallowed Fiji try for a knock-on kept the scoreline at 14-7 until just before the hour-mark when South Africa took advantage of a yellow card to Sokoiwasa to score their second try through Aseza Hele. There was no more deserving try-scorer than the number eight who carried the fight back to Fiji whenever she got her hands on the ball. Van Rensburg once again levelled the scores with the conversion.

The relentless pace of the game inevitably began to take its toll. With both sets of players tiring and the game on a knife edge, handling errors became more frequent and the penalty count, especially against South Africa, started to go through the roof.

Five minutes from time, Cavuru missed with one penalty opportunity from the tee and it looked like it would be costly when van Rensburg made no mistake from a similar distance.

However, Fiji backed themselves and got the win that keeps their hopes of progressing further in the competition alive.