Russia are European 7s champions again, on points difference, after bearing France in the final of the second leg of the Grand Prix in Kazan. 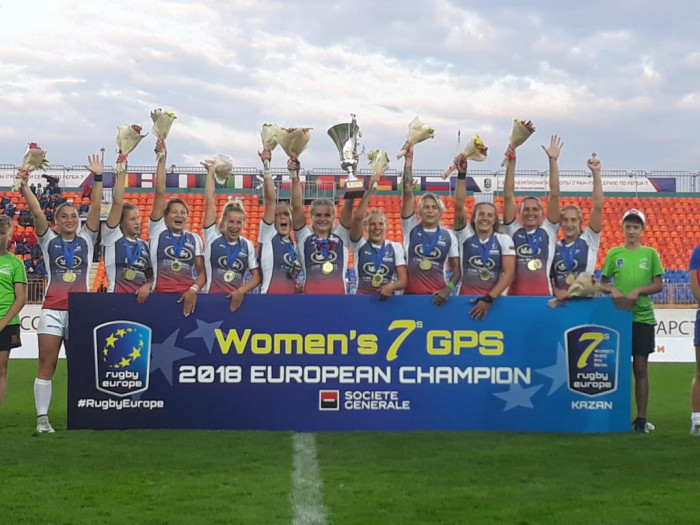 This was the third year that Rugby Europe had had to move the climax of their Grand Prix moved to September, and again most of the World Series nations used the opportunity to rest many (or in some cases all) of their leading players which lead to some remarkable results.

Although the final was again Russia v France perhaps once of the most remarkable performances was by France, who fielded none of the regular WSWS squad but instead had a team based around a core of their World University champions. Despite that they swept through Day 1 unbeaten in Pool A.  Belgium – given other squad selections – were not a great surprise to take the second spot in the pool, beating Spain’s mainly U21 team

Pool B unsurprisingly went to Russia, but it was the performance of Scotland – 12 months ago in the Europe Trophy, and winners of only one game in the first leg – who beat the much-fancied Welsh to take second spot. Wales, on the other hand, missed out of on the quarter-finals and so a place in the World Series qualifier.

But it was Pool C that featured the big shocks. Poland – relegation prospects at the start of the tournament – topped the pool with first wins over not only Ireland but England too. Poland’s narrow defeat to Italy also resulted in England missing out of a quarter final spot in a European sevens for the first time. Ever. They went on to finish 10th – losing to Wales as well – England’s worst ever sevens result.

The quarter-finals saw comfortable wins for not only France and Russia, but also Poland and Scotland too who celebrated first ever Grand Prix semi-finals – and places in Hong Kong next year that they could never have expected after the first leg.

In the semi-finals another heroic Scots performance very nearly toppled France before they went on to beat Poland in the third place game – a win that should see Scotland given a guest spot in the Paris round on the World Series next year.