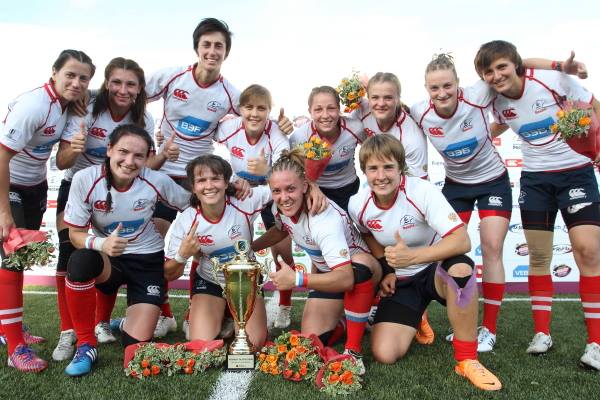 The tight final - which Russia won 19-15 - points to a highly compeitive second leg next weekend where it will be the French who have what could be vital home advantage. In the battle for third place,  England beat Spain in another close confrontation 12-7, which will sees Spain still pressing hard for a spot in Rio, with England featuring several new faces, impressing having already secured their pathway for GB. There were victories for Ireland over the Netherlands and Italy over Wales in their ranking matches which will put them in favorable positions for being part of the WSWS Qualifier later in the year, as well as still see them hunting for qualification opportunities for Rio.

Overall Russia's win was thoroughly deserved after they reached the final having scored 195 points while conceding just 7 - and those from a last play try at the end of their semi-final with Spain when they were already 36 points ahead. Alena Bogacheva comfortably led the tournament's try scorers with 10 tries, while Nadezda Kudinova and Baizat Khamidova scored six each. Only France's Caroline Ladagnous - who also scored six tries - had as productive a weekend.

However France had been drawn in a very strong pool, which they won following two very competitive games against Spain and Ireland. On day two they really hit their stride and pushed Russia all the way in the final. Europe's Olympic place is going to go down to the wire next weekend.

Although they only finished fifth, the Irish showed huge potential, clearly improving game on game. Having only beaten the Ukraine on day one they came very close to beating England in the quarter-finals, leading twice and only eventually going down to an Alex Matthews try from the final play of the game. They then proceded to storm past Italy before beating a far more experienced Dutch team in terrific plate final, taking a early 14 point lead and holding on to take the game 14-10.

England fielded a younger team, who their management freely acknowledged had had little sevens experience and little chance to play together, who finished third - a seriously impressive result with wins over the Netherlands and Spain. Only when they came up against a full-strength French team did their relative inexperience show, but if they can stay together for the second leg many of this squad could be seriously challenging for places in England's World Series team next season.

Spain and the Netherlands both came into the tournament with hopes of Olympic qualification, which made their quarter-final possibly the most important game either had played all year. The Spanish came out on top, with the Dutch rueing a mistake midway through second half that in seconds turned a chance for them to take the 14-7 lead into a similar Spanish lead, which quickly became an unassailable 21-7 advantage. However it was a game that seemed to affect both teams thereafter and the fourth and sixth places they achieved mean that they will both now realistically be looking to Lisbon and then the World Repecharge in 2016 to continue their ambitions for a place in Rio as overhauling both France and Russia in Malemort will be unlikely.

In the bottom third of the competition, Ukraine and Germany will be mainly focused with Scotland and Portugal on avoiding relegation to Division “A” of the European Championship in 2016. However, a 9th place for Scotland sees them in a strong position for staying up with players such as Jennifer Maxwell and Jade Konkel clearly relishing the sevens experience and showing that there are a number players outside the England squad with the potential to make the Great Britain team in Rio - but to compete what they and Welsh players such as Jasmine Joyce and Elinor Snowsill need is much more experience at this level, With just Malemort ahead of them (Wales and Scotland cannot go to Lisbon regardless of how well they play) it is hard to see where that is to come from.

The pools for the leg in Malemort will be drawn later.