May has been Women’s Rugby Month in Africa, a continent-wide celebration of the women’s game organised by Rugby Afrique, which reaches its climax this weekend with the sixth Africa Cup Sevens takes place this weekend in Gaborone, Botswana. 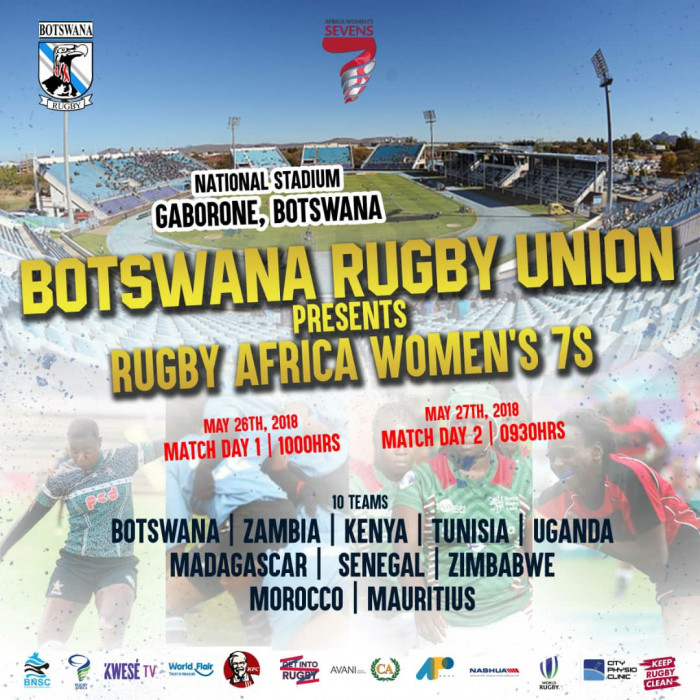 Prior to this a women’s leadership forum is being organised in Gaborone, which will centre on how to grow women’s rugby in Africa and well as improve the the technical support of the teams and encourage the involvement of women in the management structures of rugby in Africa.

Africa is falling behind the rest of the world. The withdrawal of South Africa from qualifying for the World Cup ensured that the continent had no representative in Dublin, and successive defeats in qualification finals has also ensured that there is no African team in the World Series either. An African team will be at the Rugby Sevens World Cup in San Francisco in July, but that is only because a place was reserved for the 2017 continental champions – South Africa.

The management team of Rugby Africa has stated that it intends to change this situation and plans to work with the most motivated federations to create centres of growth for women’s rugby in Africa and to establish as quickly as possible role models to be emulated.  The president of Rugby Africa, Abdelaziz Bougja sees this as a strategic priority for the continent and the sport: “Women’s rugby is a real challenge in terms of development and competitions. We look forward to discussing this with the most active federations on the continent and to bringing women’s rugby up to the next level. Women’s rugby is without doubt top of Rugby Africa’s priorities for the years to come, since without women we will not be able to develop rugby, attract new fans and new players.”

Women are in prominent positions in some nations and two of them - the president of the rugby federation of Burkina Faso (Rolande Boro) and the general director of the Tunisian rugby federation (Maha Zaoui) - will be leading the initiative.

Unfortunately, the country best placed to lead the development of African rugby is – perhaps again (after their World Cup and Olympic withdrawals) – notable for their absence. This will be the sixth annual Africa Cup – and the tenth continental-wide tournament – and every previous tournament (bar one in 2012 when they were unable to compete in the tournament because it was a World Cup qualifier, and they had already qualified) has been won by South Africa (or, in the early days, their Emerging South Africa team).

South Africa had never lost to any African opposition prior to this year, when the lost to Kenya in both the World Series qualifier and the Commonwealth Games, so this promised to be the most exciting tournament yet staged on the continent.

There has been no official explanation for South Africa’s non-participation. Rugby Afrique were listing them as an expected participant as late as 12th April – the day before the Commonwealth Games. Zambia appear to have been called in as a late replacement.

The format for this year’s tournament – which is being promoted as the first stage in qualification for the 2020 Olympic Games in some areas - is a little unusual. The 10 teams have been divided into three pools. Pools A and B – which feature the top six ranked teams - will be round-robins, with all three teams qualifying for the quarter-finals, ranked 1-6 based on their first day performances

Pool C will be effectively a knock-out. The winners of the opening matches will qualify for the quarter-finals and will be ranked 7 and 8 based on the result of their second match on Day One. The losers will play for 9th and 10th place.

There are probably four teams to watch, but one overwhelming favourite.

Kenya start as massive favourites. Five times they have reached a final, including four Africa Cups (all lost to South Africa) - and the 2012 World Cup qualifier (lost to Tunisia), which suggests that nothing in sevens is ever certain.

"Over the last four years we have reached the final but every time we lose it,” said coach Kevin Wambua. “The last two have been very close and this year, we want to go out there and make things count. We have been preparing very well and our performance in Hong Kong and Gold Coast have boosted our confidence.".

The Lionesses also reached the semi-finals of the Hong Kong Sevens and finished seventh at the Commonwealth Games and in both tournaments wins against the South Africans, and the confidence gained from those performances will boost them even more as they aim for their first title.

"I think even if they were in the tournament, we would have still won against them because what was stopping us was a psychological barrier,” said Wambua. “We beat them twice and the third match which we lost was pretty close so I know we are now at par.

"But we are not underestimating any opponent. We are going there to do our best in every match. All the teams which come there are in to win and there are no small teams. We need to treat each team with the same seriousness.

"We have put in a lot of hard work and that is why we did well in Hong Kong and Gold Coast. We are focused on consistency and ensuring we keep improving."

The squad combine young and experienced players, with at least three debutants to build squad depth.

"We want to have a bigger pool of players with international experience and from the training sessions we have had, there are players who have put their hands up for selection but are yet to get that chance. We will consider them for this tournament blending them with the experienced players we have," Wambua added.

Madagascar has huge potential. Rugby is a rapidly growing sport on the French speaking island, with some commentators claiming it to be the national sport. The number of registered adult women playing the sport is now over 1000 – meaning the island has more players than any other nation competing in Gaborone (and also more than Belgium, Netherlands and Russia).

Unfortunately, the potential of the Malagasy team is limited by the usual problem of funding, exacerbated by their geographical isolation – piling onto a coach and driving for several days (not unusual in African women’s rugby) is not an option when 500km of ocean separate you from the rest of the continent.

Even so sixteen players from the islands three clubs - FT Manjakaray, FTFA and SC Besarety (all based in the capital Antananarivo) train three times a week, at the Makis Stadium in Andohatapenaka, in the outskirts of Antananarivo, under the guidance of the national coach, Eric "Sefo" Marie Randrianarison.

Madagascar are also one of the few teams in the tournament – other than Kenya - with recent match experience having won the Indian Ocean Island championship in Réunion in March, where they retained their off-shore regional title beating Mauritius (who are also in Gabarone) and the hosts. Twelve players from Réunion have been retained for the trip to Botswana.

Uganda were number two in Africa in the early years, reaching the first three finals between 2006 and 2008, losing to South African teams in all three events.  They nionetheless went to the World Cup in 2009 as Africa had two spots, the first Ugandan team to qualify for any world cup. However, funding problems have hit the team that has failed to keep pace with neighbours Kenya, their problems typified by reports of a need to launch a fund-raising campaign to meet their travel and medical costs this year.

Of the rest Botswana (especially as hosts) have the greatest potential and should go further in the tournament than when they last took part in 2015 (when they finished 9th), though when new coach - Emanuel “Tiger” Masinki – starts his first major interview by complaining about facilities and having to fight for players with club coaches preparations could clearly have gone better. They are targeting 7th place this time, but longer term they do not lack ambition.

“The core of this team is mostly ladies I coached last year at the 15s national team,” says Masinki. “I am hoping to develop a strong team to compete in the World Rugby sevens circuit in the future. We want to use this tournament to gauge ourselves against the best in Africa. Then, only then can we set new and fresh targets. If we do things right, we should be in position to play in the next Commonwealth Games.

“I think as a nation we have proven beyond reasonable doubt that we can play anyone in the world when it comes to sevens, if we do things right and on time. So, if given the support and time, my technical team and I will make this ladies team reach heights we have never dreamt of.”

Kenya: P 43, W28, L15
Played in all nine previous tournaments – runners-up in five out of the last six, semi-finalists in the rest. Have only ever lost to South Africa, Tunisia and Uganda in Africa.

Mauritius: First appearance in the Africa Cup.
Played in the Indian Ocean Island championships in 2017 and 2018. Yet to record an international win.

Morocco: P10, L10
Returned to international sevens last year after a five-year break. Prior to their exile they had looked likely to be one of the stronger teams, reaching two regional semi-finals, and were unlucky not to win a game in African World Cup qualifier in 2012 (which they hosted). Unfortunately, last year’s tournament showed how far they had fallen behind.

Senegal: P28, W6, L22
Although their best result is 6th (in 2013 and the last three tournaments – they were also 7th in 2012, and 2014), Senegal have recorded some good wins over the years, including matches against Botswana, Morocco, Uganda and Zimbabwe, but have never threatened to break into the top four.

Tunisia: P41, W28, L13
The only nation to win the title, other than South Africa, in 2012, they were also runners-up in 2013. Missed the 2006 tournament but have played in every other reaching at least the semi-finals in each. Of the teams in Gaborone, only Kenya and Uganda have ever beaten them.

Uganda: P46, W27, L19
Finalists in the first three years, Uganda slipped to 5th in 2014 and 7th in 2015 before a recent recovery that has seen them return to the top four in recent years. Their record against opposition in this tournament is impressive. Against Kenya they have four wins and a draw in seven meetings, in all competitions. They have also beaten Madagascar in all five meetings and lost just once to Senegal in four. Only Tunisia – who beat them in both the 2012 and 2013 semi-finals – have a better record, with the North Africans recording 6 wins and a draw in 10 games.

Zambia: P23, W7, L16
Zambia played in the first four tournaments but – apart from the 2015 Olympic qualifier (when they possibly had access to extra funding) – this is their first tournament since, and they seem a late addition. However, they have 100% records against Botswana, Madagascar and Morocco, and have beaten Zimbabwe three times in six games, so have potential.

Zimbabwe: P43, W17, L26
Zimbabwe have been ever-presents at these tournaments but have only reached two semi-finals in 2015 and 2016. They have never beaten Tunisia – their pool opponents – and have only three wins against Uganda in nine attempts.