The women's competition at the Rugby World Cup Sevens has begun! 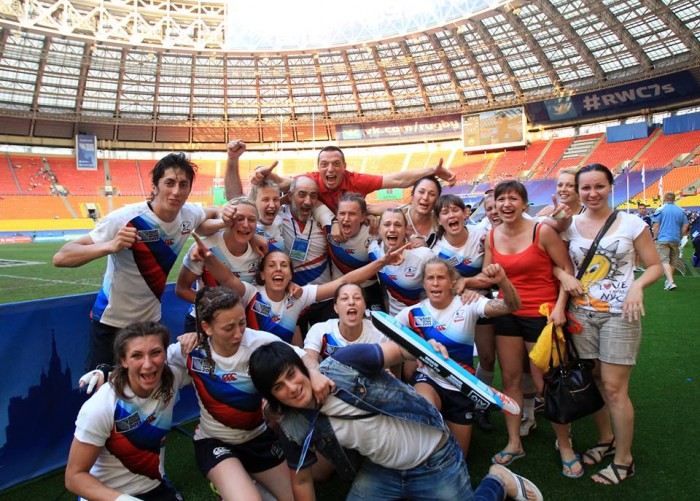 We will bring you updates from throughout the day in Moscow!

Ger yourselves warmed up with our Pool by Pool Previews!

Round One: New Zealand, finalists in 2009, got off to good start with a win over minnows Tunisia.  Leading 17-0 at halftime, they won it 36-0. Canada and Netherlands both needed a win to get through this tough tough pool and it was Canada, with Jen Kish impressing, who got it 17-7.

Round Two: Heather Moyse scored two tries in Canada's comfortable 46-0 over Tunisia and are well set up for the big game of this pool against New Zealand. Kelly Brazier looked very strong for New Zealand against the Netherlands next. They won it 41-0.

Round Three: Netherlands managed to pick up their first win in the final game beating Tunisia 26-0.  It will be scant consolation for the Dutch who by not finishing in the top 8 have lost their core status in the women's World Series for next season. But the huge clash of the day was New Zealand v Canada. New Zealand were too strong - and in Kalya McAlister and Honey Hireme they scored early and never looked back, winning it 20-5.

Round One: Australia were far too strong for China and 17-year-old Tiani Penitani was in blistering form in a 36-0 win with four tries. Ireland and South Africa played out an exciting tight match soon after. South Africa pressed hard and showed well in defence. It was 5-5 at halftime with South Africa having dominated, but Ireland did just enough in the second half to pull through 12-5.

Round Two: In round two's first game Australia were too powerful for Ireland. Ireland fought hard but went down 22-5 despite some good play in the first half. Australia showing that they are one of the sides to beat here. South Africa beat China 19-7 to get their first win with a great game from Phumeza Gadu.

Round Three: Ireland finished off their day with a fine 28-10 win over China. Claire Molloy gave a captain's performance in an important win. They then needed Australia to beat South Africa to give them a spot in the Quarters and Australia duly obliged with a 29-0 win.

Pool C
Round One: USA raced out to a 12-0 lead before Beatriz Muhlbauer scored for Brazil to bring it up to 12-7 and USA hung on with a good show of defence to win the game. Fiji hugely impressed in the next game, pushing Spain very hard in a game they were not expected to win,. They levelled it up with a minute to play and it ended 14-14

Round Two: USA were much improved in their second game, taking on a physical Fiji side and winning it in the end convincingly 31-5. In the next game Spain and Brazil played out an entertaining match and it was the Spanish whose experience told and they won it 26-10.

Round Three: Brazil and Fiji clashed in the main stadium both looking for their opening wins. Both of these sides in their own ways are making real strides this weekend and it was a close match. In the final game between USA and Spain, once again Victoria Folayan was in great form for USA, and they won it 19-7 to top the pool.

Round One: Two tries from Michaela Staniford helped England to a 15-0 win in a very physical match between the two European rivals. Russia were given a scare against Japan - it took a last minute score to secure the win 14-10 after Japan had led 10-7.

Round Two: Russia recovered from conceding an early try against France to lead 19-7 at half-time thanks to a try from Ekaterina Kazakova and a Nadezda Kudinova brace and they went ahead 26-7 but a great comeback from France was finished with a touchline convertion from Christelle le Duff for a 26-26 draw.

Round Three: France knew a win over Japan would put them in the best position for a Quarter Final and they didn't take the foot off the gas all game winning easily and scoring some great tries. The result meant that Russia needed to beat England to have any chance of a Quarter Final and a place in the World Series. In that game, Allan and Merchant put England ahead before Russia grabbed one back and when Khamidova put them ahead 17-10 the crowd went wild. England did score again but the missed convertion saw Russia through as top seeds - in probably the only real shock of day one.