We look ahead to this weekend's first round of the Women's Six Nations where England host France at Twickenham; Scotland aim to grab a much needed win at home against Ireland, and Wales travel to Italy. 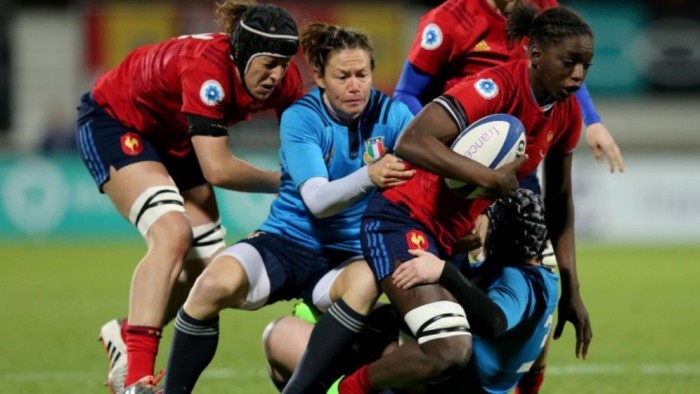 Despite all the obvious signs of progress, Scotland remain on the hunt for a first test win since 2011, which came in Amsterdam against the Netherlands - might this be the year to deliver it?

The historical journey taken by both Ireland and Scotland is fascinating the story of the game in these two nations taking very different trajectories.

Ireland are the team who for so long were the whipping girls of this Championship - a first win only game in 2003 - while Scotland were champions in 1998 and a fearsome side.

Their journeys are well told in the statistics of the win/loss timings against each other. They have met on 25 previous occasions with Scotland winning the first 14 between 1993-2006 and Ireland winning the last 11 from 2007 to date.

But progress under Shade Munro is starting to take effect. Scotland could well have beaten Spain in both of their tests last year and they are starting to push better sides closer.  But they won't have it easy this weekend. Ireland, despite their three losses in November and the presence of 5 new players in this weekend's squad, have chosen a side that looks strong on pace and power. The return of Jen Murphy gives them strength through the midfield and the combination of Ali Miller and Niamh Briggs in particular will make it tough for Scotland in the wide channels.

In a boost for Scotland, their first fulltime player Jade Konkel returns this weekend.

Ireland gave themselves the toughest of challenges by lining up Autumn tests against New Zealand, England and Canada. Perhaps it was no surprise that they lost them all, but head coach Tom Tierney told us this week that the experiences could be worth their weight in gold as Ireland go into a year where they will act as hosts for the World Cup later this summer.

But with the side they have picked, they will expect a win this weekend. The absence of Sophie Spence will still be felt and Tierney three front row replacements are all new caps, but in a season where they will consider their toughest games at home, against England and France, they will be confident about getting off with a win.

This is the start of a huge year for Italy, with a return to the World Cup for the first time since 2002. The squad selected is a mixture with three new caps and four others with half-a-dozen caps or less, while the same number have over 40 caps, lead by Sara Barratin who will make her 68th appearence. The Italian Federation has also not done them any favours with no warm-up fixtures arranged either in Autumn or as pre-tournament internationals - whereas Wales have had four major games, two in November, and two last month, all of which they have won.

The form guide in this fixture significantly favours the Italians with three wins in the last four games. The four-point margin is typical of this fixture - five of the last seven meetings have been decided by four points or less, so the relative levels of preparation could make all the difference in a game that will go down to the wire.

Wales have gone through a coaching change since the last Championship with Rowland Philips coming in and they are on something of a confidence high. Since taking charge of the team, along with assistant coaches Nick Wakley and Paul Young, Wales have won all four of their past four fixtures - including victories against upcoming opponents Ireland and Scotland.

But their away form may be a concern in the 6 Nations. Their only away win since 2013 came when they visited Scotland in round 2, 2015.

Seven players remain in the starting line-up from last year's team that took on Italy at the Talbot Athletic Ground, including captain and hooker Carys Phillips and openside Rachel Taylor.

This promises to be a classic. Forget any form guides or previous games since at least the last World Cup. Both teams are back to full strength, with all of their leading sevens players available, for the first time since August 2014. What is more (as we write!) there are also no major injury problems - especially for the French who welcome back several players, inclulding Marjorie Mayans and Jessy Tremouliere, from major injuries that saw them miss the first half of the season just in time for the Six Nations - and both are in remarkable form, as their recent club performances have shown.

However, nothing is ever straight-forward with France and a recent election for President of the French Federation resulted in the almost immediate dismissal of last year's Six Nations title-winning coaching team. They have been accused of regional bias, and it is true that they did select players from some second division sides ahead of players from northern clubs, but equally a coaching change this close to not only the Six Nations but also the World Cup is a high-risk strategy. Captain Gaelle Mignot told us only last week that the players and coaches are still getting to know each other, only days before "le crunch".

"We know it will be tough and we cannot promise to win the tournament with three away matches, including two dangerous trips to England and Ireland," warned the manager Annick Hayraud, adding: "We have set ourselves the challenge of being as effective as possible. This match will set the tempo for the World Cup year,. We want to compete in this game and not be reduced to just defending well as we did in November.. We want to see an ambitious and powerful French team in this game."

While the team selected is not unexpected, the formation is certainly original. Mayans - a centre in 2014 - moves to flanker, thanks perhaps to her experience as a forward in sevens. This resolves the battle for fullback between Caroline Ladagnous (great fullback, poor kicker) and Trémoulière (good fullback, boot like a howitzer) by moving Ladagnous into Mayan's place at centre, while Jade le Pesq steps in as a surprise selection at scrumhalf - again possibly due to sevens experience.

England meanwhile are in a similar boat - with a powerful team named which includes a raft of familiar faces. Back come Emily Scarratt and Amber Reed into the midfield and fans of Danielle Waterman will be delighted to see her back in the Championship after her star turns in the Autumn.

England’s only defeat in last season’s Six Nations came when they visited France in round 5, a loss which gave France the title but as we've said above, there is little point reading into the form of last year.

What there is for England is pressure. Now fully professional, the expectations of a title will be huge, regardless of the noises about the medium-term coming out of camp.

A word for Darlington Mowden Park second row Tamara Taylor who will make her 99th international appearance in this game - a huge achievement.

England head coach Simon Middleton said: "With 994 international caps between them, this is a strong England squad with a wealth of experience.

"Preparation has been good, having had 10 days training as a group already. We feel ready to take on France, a side we know well.