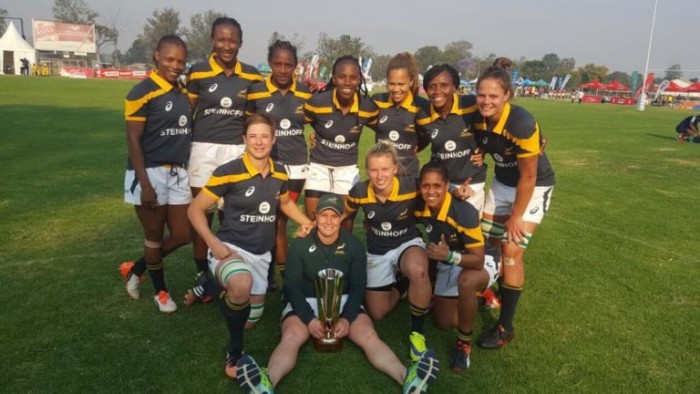 Only a technicality by SA Olympic body SASCOC prevented the team from travelling to Rio 2016 as the continental representative. Their place was eventually taken up by Kenya’s Lionesses who finished in 11th place (out of 12 teams) at the Olympic Games.

South Africa advanced to Sunday’s play-off round having won all three their Pool-matches on Saturday beating Zimbabwe 24-7, Senegal 39-0 and Namibia 39-0.

In the semi finals they beat Uganda 29-5 and they advanced to the Cup Final as did Kenya’s Lionesses.

While the Kenyans’ Olympic experience clearly showed in the Final, they succumbed to South Africa in the final minute of a tight match by 17 – 22 (half-time score: Kenya 10 – 7 RSA).

With a Kenyan defender on her back, the LadyBlitzBokke’s Zenay Jordaan scores for South Afirca in Harare, Zimbabwe.

South Africa will travel home from Zimbabwe to prepare for their next assignment: The Japan Invitational. Coach Renfred Dazel will name the team for the tournament in Hokkaido, Japan on Monday.

This group of players will depart for Japan on Tuesday, where they will go up against eight Japanese club teams and sides from New Zealand and Australia in the invitational tournament.