A commanding second half performance gave Spain a comprehensive 56-7 win in their European Championship game in Guadalajara. 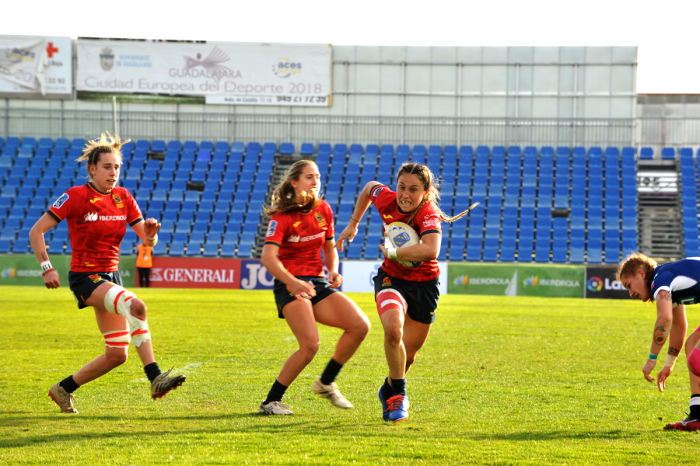 One of Spanish coach Jose Antonio Barrio’s main concerns, before his team’s game against Russia today, was the lack of information he had about his opponents, and that lack of knowledge perhaps contributed to how long it took the Leonas to break down their tough opponents.

Spain have tended to make slow starts to their tests in recent years and, though they dominated possession from the beginning, found making headway against an uncompromising Russian defence hard going. A drop goal from Armila Argudo after 5 minutes did get them on the scoreboard, but the home team were rocked back on their heels when the first try came from Russia.

An impressive break down the wing by Aleksandra Kazantseva took Russia down to the Spanish line where after several picks and goes captain Mariia Molokoedova was able to spot a gap and put her team ahead after 15 minutes.

It took another 10 minutes before Spain finally found a way through the Russian line, Anna Puig touching down from a Spanish maul, a tactic that the Russians never found an answer to throughout the match.

Two more tries from Beatriz Dominguez and Amaia Erbina in the final few minutes eventually sent Spain into the break with a more comfortable 20-7 lead, but it has been a difficult opening 40 minutes.

The second half proved to be a different affair as Spain concentrated more on using their forwards. Maria Calvo scored the first try of the second half from a maul five minutes into the half. Russia responded well, but a towering 60m kick to touch by Amalia Argudo turned defence into attack, after which Russia never recovered.

Another maul put Christina Blanco over the line after 58 minutes. Spain now led 32-7, and the floodgates began to open. A tiring Russian defence was unable to cope when a kick a head was run back at them, ending with Anna Puig getting her second try. Six minutes later the Spanish backline was again able to carve holes in the Russian defence, setting up Maika Brust to burst through to take the score to 44-7.

A quick tap penalty gave Anna Puig her hat-trick try after 72 minutes, before Maria Calvo ended the game with a try in the final minute.

The final score was 56-7 to Spain – an impressive win that should be enough to see them to the European title and a place in the continent’s World Cup qualifier - the Netherlands will need a four-try bonus point win to have any chance of preventing Spain taking the title. But Russia were by no means disgraced. With little XVs experience (there is currently no domestic XVs competition in Russia), and all of their leading players in the sevens squad, this was an impressive performance against one of the world’s top 10 teams.