As one of Africa’s leading sevens nations, it was no surprise that Tunisia swept to a comfortable win in the second Arab Sevens, this year played at the Al Shazli Zouitan Stadium in Tunis on 25th and 26th February. 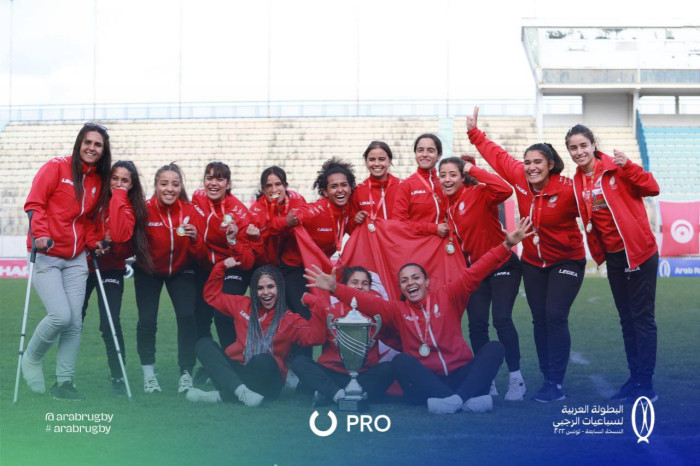 Tunisia were absent from the first Arab Sevens, played in and won by Egypt last year, but this year-with the tournament moved west along the shores of the Mediterranean to Tunis-both they and Algeria entered, replacing Syria and Lebanon. Egypt came to defend their title, and the United Arab Emirates again took part in the four-team competition.

As in 2021 the first day was a round-robin pool which decided the draw for the semi-finals on Day 2.

Tunisia put down a marker for the likely fate of the title from the opening game, when they beat UAE (third place in 2021) 63-0. The next game was slightly more of a surprise as Algeria had made their sevens debut in December with an impressive 28-14 win against Egypt in Alexandria in a qualifier for the 2022 Africa Sevens, so a 38-0 win for Egypt this weekend – while a win for the defending champions – seemed to go against form.

The second round saw Tunisia beat Egypt 34-0, while Algeria lost again, this time 10-5 to the UAE. The final round of games ended with a 38-0 win for Egypt against the UAE, giving them second spot in the pool, while Tunisia beat Algeria 45-0.

The semi-finals on Saturday were repeats of the final round of pool games, as were the outcomes and – very nearly – the scores, resulting in a final between the Tunisian hosts and the Egyptian reigning champions, won by Tunisia by a comfortable 49-5 – the Egyptian try being the only points Tunisia had conceded over the weekend. The UAE finished third, beating Algeria 17-5.

The third Arab Sevens will be played in the UAE next February.