Saracens made the perfect start to their Tyrrells Premier 15s title defence as they eased to a 38-5 victory away to Firwood Waterloo Ladies. 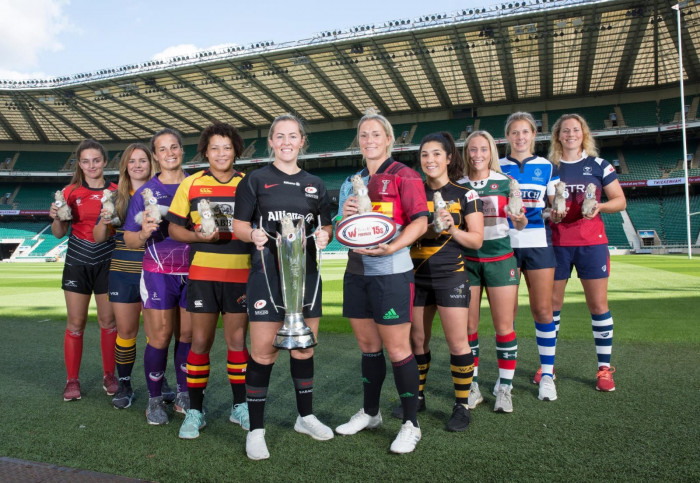 All 10 teams got their 2018-19 campaigns underway in England's top league on Saturday, with victories for three of last season’s four play-off teams.

At the Memorial Ground, it was an early Cleall twins show as Poppy and Bryony exposed the Waterloo defence, the former scoring the first try from a catch-and-drive.

England U20 pair Ellena Perry set up Rosie Galligan for the third try, which Cattell again converted for a 19-0 half-time lead.

Sarries carried their dominance into the second half, wrapping up the bonus point when Kat Evans ran in the fourth try.

Byrony Cleall joined her sister on the scoreboard with a fifth but Waterloo then hit back through captain Georgie Perris-Redding.

Saracens however had the final say as Georgie Lingham went over after good work from captain Lotte Clapp in the build-up.

Harlequins Ladies got their campaign off to a 38-24 victory away at Gloucester-Hartpury Women’s RFC.

The West Country side, who lost to Saracens in last season’s semi-finals, opened the scoring on six minutes when Sasha Acheson crashed over in the corner, but soon found the score level due to a penalty try.

On her Premier 15s debut, Millie Wood then touched down to put Gloucester-Hartpury 14-7 up before Shaunagh Brown responded for Quins and Rachael Burford ran into the corner – creating a half-time 19-14 lead for the visitors.

New recruit and Irish international Leah Lyons extended the lead after the break and Gloucester-Hartpury registered second-half tries from Acheson and Kelly Smith, but Harlequins proved too powerful as Chloe Edwards helped herself to a decisive double.

Ireland flanker Claire Molloy went over twice as five-try Wasps FC Ladies got their campaign off to a promising start with a 32-17 victory at Bristol Bears Women.

Molloy crossed the line twice in the second period to put the gloss on a fine opening-day success for Wasps.

Abby Dow and Liz Crake had earlier bagged tries for the visitors, while Tova Derk’s stunning 80-yard score was the pick of the bunch and Lizzie Goulden also slotted away a first-half penalty.

Lucy Attwood and Poppy Leitch crossed in the first half and Sarah Bern did likewise after the break to give the Bears a narrow lead at Shaftesbury Park but ultimately Wasps proved too strong and pulled away.

Loughborough Lightning got their second Tyrrells Premier 15s season off to the best start with a hard-fought 22-19 victory over visiting Richmond FC.

The Lightning pack was in muscular form in the first half and helped create a 17-0 half-time lead through two penalty tries – new fly-half Katy Daley-Mclean, also adding three points from the tee.
Richmond rallied after the break and Emelie Hellgren got the visitors’ first try after a surging break resulted in Alicia McComish drawing the last defender before playing the Swede in.

Loughborough’s pack remained on top and made it 22-5 on the hour mark with England captain Sarah Hunter going over from short range.

Richmond came back with a penalty try of their own and Libby Povey’s 79th-minute close-range effort ensured a deserved bonus point, although they fell just short of completing a memorable comeback.

In a see-saw encounter in the north east, Darlington Mowden Park Sharks battled past Worcester Valkyries 27-24 thanks to a strong second-half display.

Hannah Morton’s unconverted score in the corner gave the hosts the lead, before Zoe Bennion powered over for the visitors in response, Vicky Foxwell adding the extras.

But DMP hit Valkyries with a quick-fire double early in the second half – including one from new signing Lisa Thomson – to seize the advantage, before Nat English’s try soon after hauled Valkyries back to within three points.

However, Kat Hobson crossed the whitewash at the other end to stretch Sharks’ advantage once more, before Carys Cox’s try moments from the end ensured a nervous finale.