UL Bohemians are the Women's All-Ireland League champions for the first time since 2013, ending Old Belvedere's recent dominance of the competition with a 10-3 final win at Donnybrook. 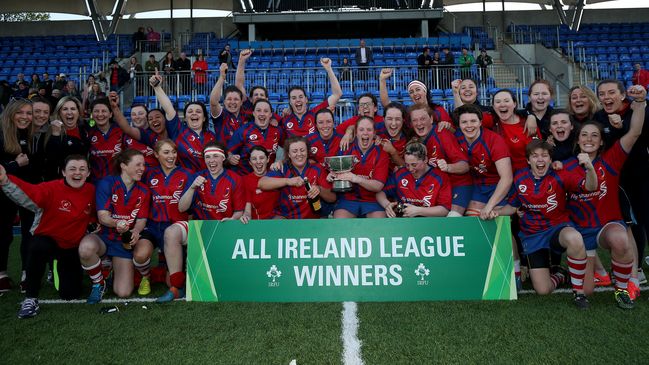 It was UL's 12th league crown, adding to their 11 previous successes between 2001 and 2013, and a richly deserved triumph for Fiona Hayes and her team-mates who topped the table by a clear 16 points this season.

Defending champions Old Belvedere had quietly come up the rails, finishing third in the final standings and squeezing past Railway Union in last Sunday's all-Dublin semi-final to give themselves a shot at a fourth successive title.

That set up another showdown with Bohemians whom they defeated 19-17 in last season's decider. However, in a scrappy first half, the Bohs forwards, led by captain Hayes, established dominance up front and that paved the way for their 15th victory of their 16-match march to league success.

It was an error-strewn encounter at times, Mike Storey's UL opening the scoring with a 16th minute try from number 8 Chloe Pearse via a dominant maul. Ireland Sevens international Claire Keohane,who featured prominently from scrum half, fed Pearse on the blindside for a well-taken unconverted score.

Nerves and the occasion seemed to get to both teams in the first quarter. Belvedere struggled to create scoring opportunities and if there were not as many errors in the UL back-line, they could have added to their lead. Unfortunately, their execution let them down and the injury-enforced loss of Anna Caplice robbed them of one of their players of the season.

One of the final's standout players was experienced Ireland back Niamh Kavanagh who made her international bow back in 2011. The Offaly woman put in a massive shift in the centre for UL, both in defence and attack.

Indeed, the table toppers' Ireland-capped players showed their class and experience on the day, Hayes and her front row colleagues Gill Bourke and Fiona Reidy as well as wingers Eimear Considineand Liz Burke who both looked dangerous with ball in hand.

The second try came after a break in play for an injury to Belvedere captain Jackie Shiels, entering the final quarter. UL moved the ball quickly from a scrum, across the back-line to Considine who used her pace from the Sevens game to sprint clear up the left wing and score in the corner.

The conversion was missed and Alex Denby's Belvedere side built for a strong finish, with centre Shiels firing over a penalty from in front of the posts to get them off the mark in the 68th minute.

Crucially, with Bohs down to 14 players due to Kavanagh's sin-binning and just four minutes left on the clock, 'Belvo blew a lineout opportunity when Nora Stapleton's attempted kick to the corner missed touch. UL thumped it back downfield and seven points proved to be the winning margin for battle-hardened Bohs.

Giving her reaction afterwards, victorious Bohs captain Fiona Hayes said: "We're absolutely delighted to win. We've been training hard all season. You can be at the top (of the table) and be ahead by however many points, but when it comes to semi-finals and finals, it's a whole different ball game.

"So, we wanted to keep the foot down and really go for it. Look, we came out as winners. It probably could have gone either way at times, but I'm proud of the girls, they did really well.

"I think we've had a fairly consistent team this year and that's what has stood to us. Even the international players who were away, they'd come back for training and were in and out of the team. It came together for us in the end and that's all we wanted - we wanted to play well in the final.

"I've told them every time we play, that we're the best team in the country. You have to tell them that! But until you win a final, you're not. We put the effort in and thank God we came out as winners here today."

Old Belvedere head coach Alex Denby admitted: "It's very disappointing, but I think it was just their day. There were a couple of things that didn't go our way, sometimes just the bounce of the ball and reading it.

"It would have been brilliant to get four in-a-row, but I think it was just their day - hats off to Bohs. We'll try and bounce back, learn from this and try to get our hands back on the trophy next season.

"We've had a good season, it's been a different challenge to what we've gone through before. A full 14-game season, losing a lot of bodies. We were missing some experience today, we had two 20-year-olds in the back row with serious futures ahead of them.

"There's some serious talent in our team for the future, there's girls there who will wear green jerseys for a long time. It's disappointing to lose today, but there's positives to be taken nonetheless. Well done to Bohs, they're worthy champions."