Two elite USA women’s rugby squads have been named this week, with the U20s players chosen for the upcoming Nations Cup along with an elite 7s senior playing squad. The U20s squad features 26 players from 26 different schools and club programmes from around the country. 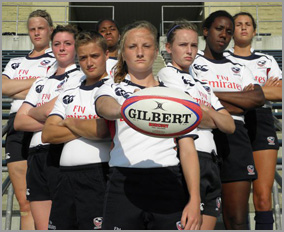 U20s coach Bryn Chivers will take the squad to California for the competition being held from July 14 to 23 where they will face South Africa, Canada and England.

This is a very different team for us, said Chivers. With only nine returning players from last year, this will be the least experienced squad weve had since the 2007 tour to England.

While the squad may be a little green, they have already had success together. At the recent Collegiate National All-Star Championships in Pittsburgh, Pa., they beat the defending champions, the Northeast All-Stars, 24-5 in their opening game. The U20s staged a massive second half comeback in the final of that tournament, but narrowly lost to the Midwest with a final score 25-26.

Holding the U20 Camp in conjunction with the [All-Star Championship] gave us a great opportunity to work through combinations in practice and then challenge the players in high level competition, said Chivers.

To follow the USA Womens U20s, check out their blog: http://womeneaglesu20s.blogspot.com

Meanwhile USA womens rugby 7s Head Coach, Ric Suggitt has announced his squad of players to attend an elite camp at the Olympic Training Center in California from July 8-17.

The squad includes players from club, womens Premier League and college ranks. The camp is aimed at further developing to level skills and to continue to deepen the player pool for international selection.

The team is also training with an eye on the Dubai 7s in December.

At this Elite camp, we are looking at some of our top prospects for international 7s, said Suggitt. We have a handful of wily veterans and some youthful enthusiasm. We believe we have the correct mixture for blending the squad for the 2011 season.

At the camp, players will undergo fitness testing, skill break down, modified games and scrimmages. It will be a good measurement as the athletes will compete peer-to-peer in a controlled environment, Suggitt added.