The United States won their last round of the last season's series, and opened with a win in the first round of the 2019-20 series which saw them beat all of the other top four teams on the final day. 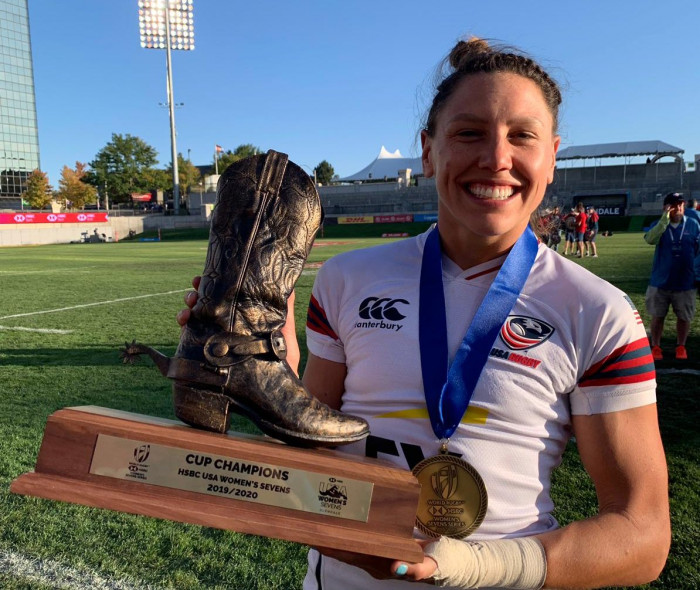 The 2019/20 World Series opened as the 2018/19 season had ended, with four of the top five teams from last season ending the day unbeaten.

Champions New Zealand ran in 17 tries, Australia topped Pool C - but that was thanks to a Canadian missed conversion which meant that Canada also ended the day unbeaten. And ​France battled back to come from behind to beat the United States and end the day with a 100% record.

​Most of the first round of games went with seeding, except for Russia’s match against England where the Russians gained some revenge for their loss in the Olympic qualifier, looking sharper and more clinical than their European counterparts, scoring six tries with Elena Zdrokova and Daria Shestakova running in two each.

There were no surprises in the second round of games, although Spain pushed Canada all the way in their game, and England found themselves in a real contest against Japan. Megan Jones, Holly Aitchison and Emma Uren gave them a 14-0 and 21-7 lead, but Yume Hirano’s double provided a nervy finish, although England held on for a 21-14 victory.

Spain’s performance against Canada meant that they only needed to defeat Fiji to make quarters, which they did despite a late Fijian comeback. Ireland, on the other hand, were well beaten 45-7 by the USA in the previous round and needed a big win over Brazil, but only won by 28-7.

The final spot came down to the final game of the day. England took on New Zealand and could afford to lose by 29 points and still make the last eight, but a champions performance gave New Zealand a 36-0 win, the final try giving Ireland a slightly unexpected place quarter finals.

France and Australia opened the second day with comfortable quarter-final wins before the United States took on great rivals Canada, who looked in control at 19-7 just before halftime – only for an Alev Kelter try to set up a classic second half where the lead changed hands three times before a Cheta Emba try won the game for the hosts from the final play. With New Zealand winning comfortably against Ireland, four of last season’s top five were in the semi-finals.

The two semis were in marked contrast to each other. Australia, looking back on their Olympic gold form, took France apart with an astonishing 40-0 win before the States took on the Ferns.

With two wins in their last three meetings the United States have the best record of all team against New Zealand, and began well with a try from Alev Kelter and dominated most of the rest of the first half, but failed to score, giving room for Stacey Waaka to pull a try back at the end of the first half. A Shakira Baker try put New Zealand 12-7 ahead early in the second half before two late tries from Kristi Kirshe and Lauren Doyle put the USA 19-12 ahead, but with time for the final play.

After three tension-packed minutes, a second Waaka try gave the Ferns a chance to tie the score – but she had been pushed wide and the conversion was missed.

The final was even better, but not because the result was close but because the USA took their game to another level. Australia had looked magnificent all weekend but had no answer to the United States as they won 26-7 in front of their home fans.